SC Bern takes on the IIHF

If you buy something from an SB Nation link, Vox Media may earn a commission. See our ethics statement.

Share All sharing options for: SC Bern takes on the IIHF

The Champions Hockey League, which lasted just one season and saw Switzerland's ZSC Lions become the only champions of the format, has moved from an embarrassment to an ugly battle that is heading to the courts in at least one instance.  SC Bern of the NLA is suing the IIHF for 1.2m Swiss Francs for lost revenue associated with the sudden cancellation of the 2009-10 tournament.  The money amounts to about $400k in lost prize money, $600k in investment surrounding the club's involvement in the league, and interest on top of that.  They're taking the case to the Court of Arbitration for Sport in Lusanne, France, after failing to come to any sort of agreement with the IIHF over compensation. 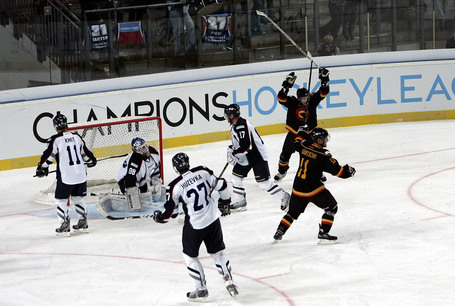 SC Bern is not the only club seeking compensation, but they're the ones setting the precedent.  In Germany, Eisbären Berlin, who earned a spot in the CHL for the cancelled 2009-10 season, is reaching the end of their negotiations with the IIHF and along with fellow DEL club the Hannover Scorpions, are likely to seek action soon.  Clubs from the Czech Republic, Sweden, Slovakia and Finland are all having similar trouble in negotiations with the IIHF, though they could be content to see the Bern and potential Berlin/Hannover case work itself out.

The late cancellation of the 2009-10 CHL season might give the clubs a modest case when it comes to building rosters to compete in the CHL season, but to differentiate those costs from the costs of building their rosters for competing in their national league might be difficult.  The prize money, however, is the real point of contention in negotiations:  SC Bern orginally appealed for 100,000 Euros (under 134,000 Swiss Francs), but the lack of an amicable agreement seems to have made the club seek further compensation.

The whole CHL experience seems to have soured the relationship between the top European clubs and leagues with the IIHF.  They still highly value international competition, as evidenced by this year's pre-season European Trophy tournament, but the IIHF organized Victoria Cup, an exhibition between a NHL team and a European champion (was supposed to be the CHL champion) did not take place this past year.  It's also safe to say that the demands for compensation went up after no agreement was set in place for a relaunch of the CHL this season:  even though it had been seen as a major cog of the IIHF going forward.  Here's a PDF of a summary of the IIHF's budget from last year for reference.

One club lost in the mix here is HC Davos of Switzerland.  Davos has decided to be an observer as the other participants duke it out, due to the fact that they work in conjunction with the IIHF in hosting the annual Spengler Cup tournament.  It's not a comfortable position for the club, who obviously have benefited from the IIHF's support in the past, yet lost out on a lot of revenue as a result of the broken contract.

The future of European club hockey clearly hangs in the balance of international competition.  Usually, the IIHF has provided quality tournaments for its members, but the failure to secure sponsors in the wake of the economic crisis in 2008/09 really compromised their position.  This year's trial run of the European Trophy, occurring entirely in the preseason and featuring incomplete rosters, didn't attract a ton of attention, but the plan is to run it during the season in future years.  Clubs seem at least interested in the idea of going solo in this endeavor, and the icy relationship with the IIHF may have put a permanent end to the idea of a IIHF run Champions Hockey League.

Meanwhile, in actual IIHF sanctioned international tournament news, the Continental Cup will enter their second group phase this weekend in Tilburg, Netherlands, and Maribor, Slovenia.  In Group B action in Tilburg, the host Tilburg Trappers will take on Kohtla-Järve Viru Sputnik from Estonia, Cracovia Krakow from Poland, and qualifiers CH Jaca from Spain.  HDK Maribor of Slovenia will host Dab Danaujvaros of Hungary, SC Miercurea Ciuc of Romania, and Sary-Arka Karaganda of Kazakhstan.  The tournaments are round robin format, with the winner of Group B heading to Group D in Rouen, France, and the Group C winners will advance to Group E in Asagio, Italy.  Those tournaments will be held in late November.  It's also been announced that the Super Final in Minsk, Belarus, will be held in the 15,000 seat Minsk Arena, the new rink that has hosted the 2010 KHL All-Star Game and 2010 U18 IIHF World Championships in its first year so far.