Share All sharing options for: Champions Hockey League Returns for 2011-12 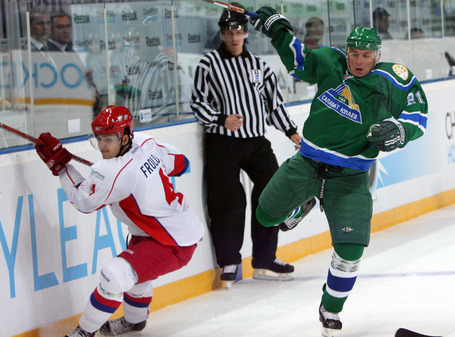 The IIHF has finally managed to resurrect the Champions Hockey League, a format left for dead after one highly publicized season in 2008-09.  After two years of false starts, sponsors backing out, and clubs beginning to seek compensation in court for lost revenue, the IIHF announced today that an agreement had been made amongst the federations of the top seven European hockey countries to re-launch the league next year.  The deal is a three year deal, so barring further issues with sponsorship, it should provide the financial framework for the format through 2014.  The CHL was a hot button issue during this summer's World Hockey Summit in Toronto, and it shouldn't come as much of a surprise that the deal sees the league through the Sochi Olympics, as the IIHF is starting to look at the hockey world through the four year Olympic cycle.

For those wanting some insight into the negotiations, here's a clue from the IIHF's statement:

The IIHF will provide financing and personnel resources for the implementation of the Champions Hockey League, thus committing to an excess of CHF 1.5 million per year to cover the expenses for league administration and game and league operation.

Furthermore, the IIHF will provide settlement compensation for the cancelled 2009-2010 Champions Hockey League season. (To the clubs which were due to participate in the 2009-2010 CHL).

Note: The payment of the settlement fee is pending confirmation of participation in the Champions Hockey League re-launch project. The implementation of the settlement program implies withdrawal of any legal claims towards the IIHF.

An argument could be made that SC Bern's legal battle with the IIHF might have forced this settlement, and framework for the future format.

The tournament will consist of a double round robin format, with sixteen teams divided into four groups.  Invitations will be extended to the following:  the 2010-11 regular season and playoff champions of the KHL (Russia), Elitserien (Sweden), SM-Liiga (Finland), NLA (Switzerland), Tipsport Extraliga (Czech Rep.), DEL (Germany), and Slovnaft Extraliga (Slovakia); the 2011 IIHF Continental Cup Champion; and the 2009 CHL Champion ZSC Lions.  No word on how the groups will be divided up, or what happens if a non-Russian team earns one of the KHL's invites (not likely, but possible).  That's 12 games (6 rounds) in each group (48), with the top 2 teams in each group advancing to the quarterfinals.  Each playoff round will also be a home and home format, so that is 8 quarterfinal games, 4 semifinal games, and 2 Final games, giving us a total of 62 games.

While the clubs will be forced to play up to 12 games in addition to their domestic league action, the revenue generated by the games should be significant, both in terms of gate receipts and television revenue.  The 2008-09 CHL season was broadcast even in Canada, so it should be readily available this time as well.

Personally, I'm a fan of this set up...  the last format was based on a bizarre league ranking system, while this one keeps it simple and spreads participation across the continent.  And by allowing the Continental Cup champion into the mix, it will hopefully give prestige to that tournament...  no doubt now the 2011 Super Final, between club teams Yunost Minsk (Belarus), Red Bull Salzburg (Austria), SonderjyskE Vojens (Denmark), and Dragons de Rouen (France) will be that much more hotly contested.

And to be honest:  thank God something has finally been done.  It was such an obvious gap in the European hockey marketplace, and is really the simplest solution to have both a higher quality of hockey on the continent, as well as a pan-European format.