Group A features the star studded defending champion Russians, plus Olympic semi-finalists Slovakia, the upstart Belorussians, and last year's Division 1 winners Kazakhstan.  What should we expect from these four nations at this tournament? 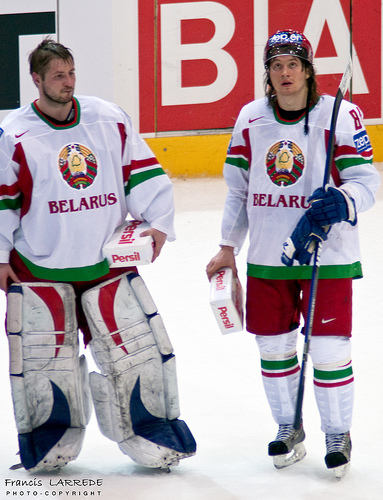 Andrei Mezin and Mikhail Grabovski play hockey, then do their laundry.  Photo via farm4.static.flickr.com

The former Soviet Republic of Belarus has maintained a relatively strong showing in recent years at the international hockey level, building their way to an 8th place ranking last year before falling to 9th after the Olympics.  With one team in the KHL (Dynamo Minsk), the Belorussians, like Latvia rely heavily on their top players playing together all year in the KHL, as 10 players come from that team.  With the Montreal Canadiens still in the Stanley Cup playoffs, two of the country's most famous players, Andrei and Sergei Kostitsyn, are unavailable to help the team this year, although there is little doubt Sergei Kostitsyn would rather be playing here than sitting in Montreal.  This year's club will rely heavily on goaltender Andrei Mezin, a 35 year old goalie who has represented the country internationally since its formation in 1993.  Mezin recently helped Dynamo Minsk engineer a first round upset in the KHL playoffs, not unlike the famous upset he helped engineer in the 2002 Olympics against Sweden.

Offensively, Toronto Maple Leafs forward Mikhail Grabovski leads the attack, and he'll be helped out by KHLers Alexei Kalyhuzhny and Dmitri Meleshko.  Mikhail Stefanovich, a Toronto Maple Leafs prospect, will also join the team in a smaller role, marking the second time the 20 year old has played at this tournament.  On defense, the team is led by longtime NHL veteran Ruslan Salei, who is also serving as team captain.  Grand Rapids Griffins player Sergei Kolosov appears to be his defense partner, though he'll likely play significantly less than Salei.

For Belarus, the tournament got off to a good start after falling behind 2-0 to Kazakhstan, scoring five unanswered goals which should ensure them a spot in the elimination round.  Making it to the playoffs as the 9th ranked team has to be considered the goal of this tournament. 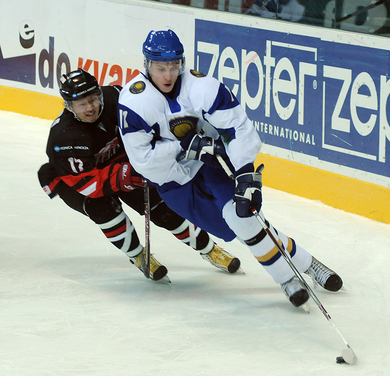 There's not a lot to say about Kazakhstan's chances at the IIHF Men's World Championships.  A win would be a job well done, and finishing higher than 15th of 16 teams would be incredible.  From 2004-2006, Kazakhstan managed to stay in the top 16, advancing to the elimination round once (in 2005).  Once relegated in 2006, they took a surprising three years to get back to the top division of the World Championships.  Their roster is relatively old, with their youngest players being two 21 year olds in a tournament full of teenagers.  Three of their players are over 40, including one time NHL callup Konstantin Shafronov.

Key to the team's success will be Maxim Semenov, a former draft pick of the Toronto Maple Leafs.  The defenseman will likely lead the team in ice time, and be paired with the young Roman Sovchenko.  Sovchenko had four points in five games at last year's Division 1 tournament, which helped the team earn promotion.  Up front, it's anyone's guess as to who will score.  Vadim Krasnoslabodtsev and Yevgeny Rymarev were the team's leading scorers a year ago, but both were underutilized in the opening game against Belarus.  Kazakhstan will be looking to steal a couple of points here and there to potentially avoid relegation.  With the loss to Belarus, their best shot is to push Slovakia, or wait until the relegation round for wins.

EDIT:  Pavel Datsyuk has been added to the roster as the 11th NHLer. 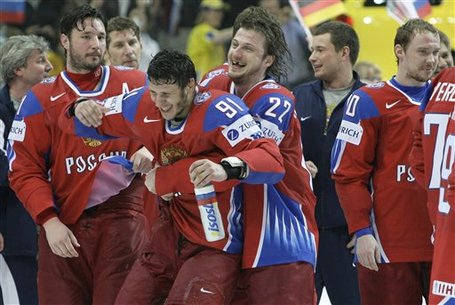 February 24, 2010:  Russia gets blown out 7-3 by Canada in the Olympic quarterfinal.  The stunning loss gives Russia a final placing of 6th at the Olympics, a result that seems inconceivable after winning the past two World Championships.  With the Olympics heading to Sochi in 2014, Russian pride hasn't been more damaged in the hockey world.  It's because of this that Russia has managed to get nearly half their team back from their Olympic team in a year when most of the top countries are going with youth movements.  The star studded top 6 of Russia will be the catalyst for the team going forward, with Ovechkin and Semin teaming up with their former Washington Capitals teammate Sergei Fedorov to form the most dangerous line in the tournament.  Ilya Kovalchuk, set to break the bank on a new contract this summer either in the NHL or KHL, will be the team's captain and be the most skilled second line forward in the tournament.

In goal, the Russians have turned the job over to some younger netminders.  In the first game, they turned to Vasiliy Koshechkin, but they also have Semyon Varlamov on their roster.  Varlamov has to be looked at as a potential starter for 2014, and he may get his shot to lead the national team at some point in this tournament.

With the embarrassing ouster in Vancouver so fresh in their memory, motivation is not an issue for this Russian team.  If anything, confidence might play a bigger role, and lack of confidence is something we aren't used to from the Russian team in recent years.  How they respond to their recent performance and the pressure of being overwhelming favourites will be one of the more intriguing aspects of the tournament. 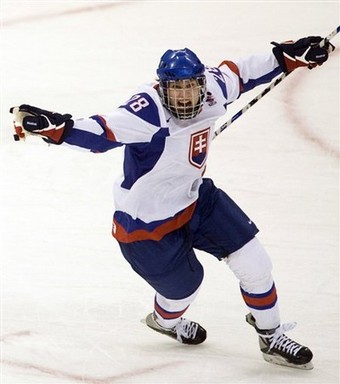 Richard Panik is one of the young players Slovakia is grooming for Sochi at this year's World Championships.  Photo via cache.daylife.com

Unlike Russia, Slovakia is quickly turning the page on 2010, despite the fact that they had their best ever finish at a best on best tournament.  Slovakia's greatest generation is aging, and it's unlikely many of the players that helped the team finish 4th in February will be around for 2014, so Slovakia has opened the doors at this year's World Championships to a lot of inexperienced international players.  Richard Panik and Tomas Tatar, dynamic forwards on their World Junior team the past couple of years, will get a chance here (particularly Panik).  Players once highly touted in the NHL like Marek Zagrapan and Vladamir Mihalik are also here.  NHLers Marek Svatos, Peter Budaj and Andrej Sekera will be looked on for big roles at this year's team, as will international veterans like Ivan Ciernik, Richard Lintner, and Ivan Majesky.

Maintaining a high spot in the World Rankings is of importance to Slovakia as well.  Prior to the Olympics, Slovakia was ranked 9th, a ranking that put them behind both Switzerland and Belarus.  Clearly, for reputation's sake, Slovakia will be trying to at least maintain their more appropriate ranking of 7th, and maybe even aim higher.  With former Washington Capitals and Team Belarus coach Glen Hanlon now running the show for Slovakia, it will be interesting to see how Hanlon works the inexperienced players into major tournament play this year and next.  Next year, Slovakia will be the host nation, so finding a few surprising new players will be a bonus for assembling next year's team.