In our final preview, we look at the teams involved in Group C.  This group features the powerhouse Swedish team, the always strong Czech Republic, Olympic qualifiers Norway, and France, one of the IIHF's founding members. 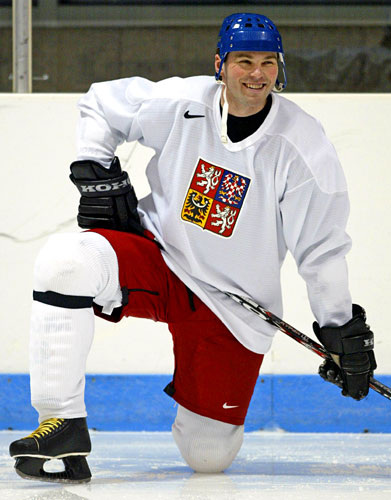 Like the other established nations, the Czechs are in a transition phase away from their 2010 Olympic team.  Unlike other teams, they don't seem to be using this tournament to integrate younger players into elite competition.  Their roster looks more like a 'B team' with 'A team' goaltending.  Both Tomas Vokoun and Ondrej Pavelec return from the Olympic team, which seems odd.  Vokoun was the starter in Vancouver, and this seems like the time to give the young Pavelec a chance to lead the team, but he'll be relegated to the backup role again.  Likewise, it's hard for the Czech team to say goodbye to Jagr, and from a North American fan's standpoint, that's a good thing.  Jagr is an elite player with fans worldwide, and with him closing out his career in the KHL, seeing the aging star still skating is a rare treat.

The Czechs just have one player that is under 24, that being Columbus Blue Jackets forward Jakub Voracek.  Instead of picking younger talent, the Czechs have gone with some of the best European league talent from age 25-30 they could find.  It should keep the team competitive, but players like Jiri Novotny, Karl Rachunek, Filip Novak and Lukas Kaspar don't sound like a recipe for success either right now or in the future.  An injury to Phoenix Coyotes forward Martin Hanzal doesn't help things, and the Czechs had a lot of players turn them down outright, like Michael Repik and Roman Polak.  So, this Czech team will have to rely on their strong goaltending and a scoring by committee approach as they try to play for a medal again, which they haven't done since winning gold in the NHL lockout year of 2005. 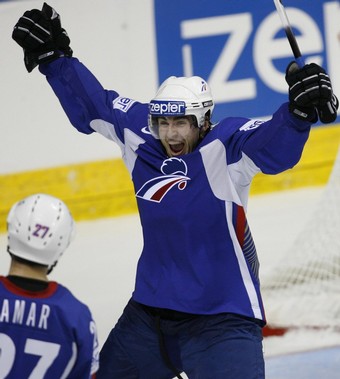 Yorick Treille and Baptistie Amar hope to have a few celebratory moments in Germany.  Photo via cache.daylife.com

France has a long history in the IIHF, as they were a founding member of the organization back in 1908.  However, France has never been anything resembling a power in the sport, and will look to stay in the top division for a third straight year, something they haven't done since a relatively impressive run from 1992-2000.  Teams like Kazakhstan and Italy surely are targeting France as a team to knock out of the top division in order to qualify for next year's championships in Slovakia.  To avoid relegation, France has a roster with 8 players under the age of 25, and will lean heavily on the 8 players they have in elite European leagues.

Those players include the Trielle brothers, Yorick and Sacha, both of whom are forwards.  Yorick is a veteran of international competition, while Sacha is a 22 year old who plays for Malmo in Sweden.  Laurent Meunier, who plays for Timra in Sweden, will also be counted on for offense.  On defense, the team's go to defender will be Baptiste Amar, joined by Vincent Bachet.  Amar is another Eliteseren player, while Bachet plays in France's top league.  France's best players tend to have to leave the country to develop, but Vincent Bachet and Luc Tardif have shown to be reliable players at the World Championship level in the past despite playing for French clubs. 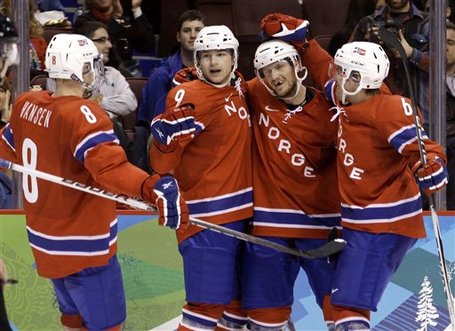 Norway will look to build upon their Olympic experience at the 2010 World Championships.  Photo via wintergames.ap.org

They don't have North American fan favourite Tore Vikingstad anymore, but the Norwegians have now caught the eye of fans across the pond, and that experience in the limelight makes them an interesting team to watch at this tournament.  Because the team has no active NHLers, the team from Vancouver is fairly in tact, with promising young blueliner Jonas Holos and prolific Elitseren scorer Mats Zuccarello Aasen still leading the team.  Team captain (and Olympic flag bearer) Tommy Jakobsen also returns to help lead the defence corps, even as he's pushing 40 years old.  And, of course, former NHLer Patrick Thoresen is reportedly looking to parlay his recent international success into a return to the NHL, so Thoresen's performance might be worth watching closely as a result.

In this pool, Norway's goal is simple:  beat France, and maybe try and steal a point or two against the Czechs.  They almost managed to steal a point against Sweden, tying them at 2 early in the third period of the opening game, but eventually Sweden broke the game open with 3 late goals.  If the team does qualify for the elimination round as expected, the next goal is to try and get into the playoffs, which would be a huge accomplishment for the team.  More than likely, this team will finish in the 9-12 range.

Notable Absentees:  Only 2 players from their 2010 Olympic team have returned, in Gustavsson and Mattias Weinhandl 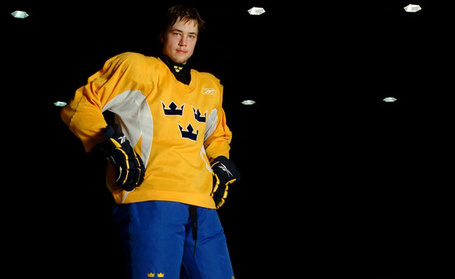 Much is being made of the amount of teenagers on Team Canada, but Team Sweden has quietly put together a team with five teenagers as well.  And like Canada, they're all quite good, having proved themselves professionally and at the World Junior level.  Erik Karlsson and Viktor Hedman have both established themselves as top 4 defensemen after just their rookie year, while Oliver Ekman-Larsson and Magnus Paajarvi-Svensson look poised to be top rookies in the NHL next season.  Goaltender Jakub Markstrom is the 5th teenager, and it'll be interesting if he gets any game action in this tournament.  Jonas Gustavsson of the Toronto Maple Leafs is expected to take on most of the goaltending duties in this tournament.

Sweden has been close in recent years at the World Championships, winning the bronze last year, but like Russia, their early ouster from the 2010 Olympics is fresh on everyone's minds.  Rather than bring everyone back on a vengence mission, however, the Swedes aren't deviating from the plan at all.  Joining Hedman on the top pair is team captain Magnus Johansson, who is also the oldest player on the team at 36.  Veterans Mattias Weinhandl, Tony Martensson and Marcus Nilson will be asked to compliment the talents of the younger forwards like Paajarvi, Linus Omark, and Andreas Engqvist.  Both Omark and Engqvist are due to come to North America next year as well.

In this tournament, finishing in the medals still has to be the expectation, and the Swedes have gone into this tournament with only 20 players on their roster, leaving plenty of room to add players from the Detroit Red Wings and possibly the Vancouver Canucks, both of whom have lots of Swedish talent.  It'll be interesting to see who Sweden adds to their roster, as it could have a huge impact on their medal hopes.