The Steady Yet Remarkable Growth of Danish Hockey

Share All sharing options for: The Steady Yet Remarkable Growth of Danish Hockey 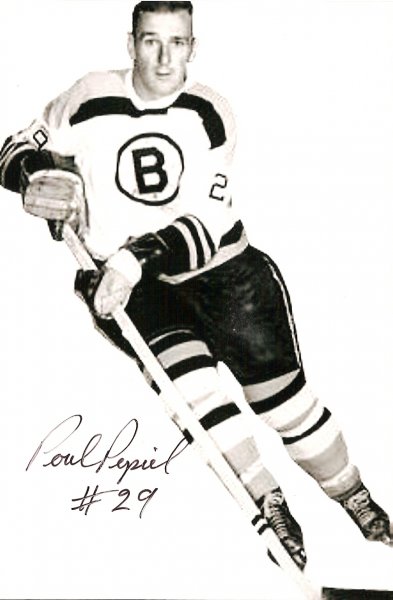 This is Poul Popeil.  In 1965-66, he became the first Danish born hockey player to play in the NHL, earning a 3 game callup from the AHL's Hershey Bears to play for the Boston Bruins.  He even earned a point in his 3 game stint that year, but he never played for the Bruins again due to NHL expansion.  He was a fairly good defenseman, being able to put up good offensive numbers while showing a lot of toughness.  He would go on to play a single game for the Los Angeles Kings, 94 for the Detroit Red Wings, 116 for the first Vancouver Canucks teams, and 10 games for the Edmonton Oilers in their debut NHL season in 1979-80 before retiring at age 39 in 1982.

The catch here is, he was only Danish by birth.  While he was born in Søllestad, Denmark, he was really raised in St. Catherine's, Ontario.  Popeil didn't once represent Denmark internationally, and identified himself as a Canadian and eventually American.  In fact, it'd be many years after Popeil's long professional career was over before any Danish national players would be good enough to get noticed by the NHL.  Yet today, Denmark sits on top of the Group D standings at the IIHFWorld Championships after beating traditional hockey powers in Finland and the USA.  How'd they get there?

While Poul Popeil was still an infant, Denmark was just starting their national hockey program.  Denmark gained acceptance into the IIHF in 1949, and made their international debut at the World Championships that year in Stockholm, Sweden.  Their first ever game?  A 47-0 drubbing to Canada.  This remains the most lopsided game in the history of the IIHF World Championships (at the top level).  The tournament didn't get much better for Denmark; they lost 25-1 to Austria, 8-3 to Belgium andthen withdrew from the tournament before facing Norway or Finland.  They finished 10th, and didn't return to IIHF competition until 1962.  That year, they finished 6th in the B pool, and they were relegated to the C pool.  The Danes remained in the C pool nearly exclusively from 1963 to 1991, save for 1979, where after earning promotion the previous year, the Danes quickly returned to the C pool until again earning promotion with a 2nd place finish in 1987.

1988 was the last year that the World Championships were not held due to it being an Olympic year, so the Danish team had to weight until 1989 to join the B pool.  This is where things were finally start to turn around for the Danish hockey program.  In the mid-1980s, three Danish players were good enough to be selected in the late rounds of the NHL Entry Draft.  They were Heinz Ehlers (NY Rangers, 188th overall in 1984), Søren True (NY Rangers, 240th overall in 1986), and Jesper Duus (Edmonton, 241st overall in 1987).  These were the first Danish born players taken in the NHL Entry Draft, and their arrival at the international level helped propel Denmark out of the basement of international play.  In 1991, just prior to the breakup of many Eastern Bloc nations (and the USSR), the Danes finally won the Group C IIHF tournament, the first IIHF tournament they had ever won. 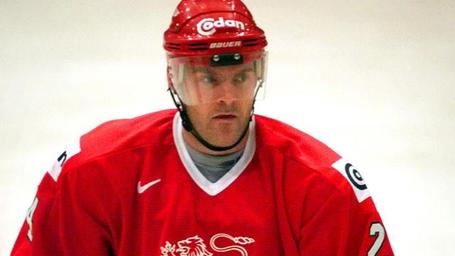 While this group elevated Danish hockey to their strongest standing in history, they ultimately weren't the generation that pushed Danish hockey into the top level.  While the next  generation of Danish hockey players on yielded a single NHL draft pick in F Kim Staal (Montreal, 92nd overall in 1996), they yielded solid European professionals like D Jesper Damgaard, F Thor Dresler, D Daniel Nielsen and G Peter HIrsch.  Many of these players played in the Elitseren or Allsvenskan in Sweden (at least briefly), as the Danish circuit is still considered a substandard professional league.  This group of players got their feet wet at the international level when Denmark hosted the Group B championships in 1998, winning the tournament.  While they did not build on that tournament win and advance through the qualification rounds the next year to the top level, the final step was only four years away.  By 2002, the IIHF had gone to a simple relegation/promotion practice and Denmark won the Division 1, Group B championships in Hungary.  This qualified them for the 2003 top level tournament in Finland, the level they have competed at ever since. 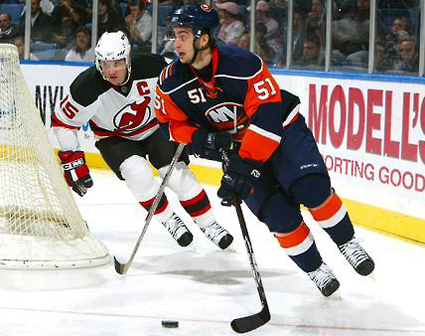 Frans Nielsen, the first Danish trained player in the NHL.  Photo via www.sporten.dk

The national program has been helped in large part by the very regionally based youth programs.  While the majority of Danes, and Danish hockey players, do come from the Copenhagen metropolitan area (notably suburbs like Rødovre and Herlev), the smaller western cities of Herning and Esbjerg seem to be the most prolific at turning out quality hockey players.  Herning is the hometown of the first Danish trained NHL player, Frans Nielsen, who made his NHL debut with the New York Islanders on January 6, 2007.  Herning is also the birthplace of Peter Regin, Daniel Nielsen, and 2010 draft eligible Patrick Björkstrand.  While Herning is the forward factory, Esbjerg is becoming the prime development spot for young defenders.  Philip Larsen, who recently became the first Danish trained defensemen to play in the NHL, hails from there, as does 2010 draft prospect Jannick Christensen. 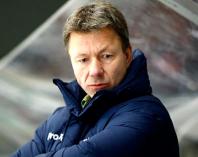 Patrick Björkstrand's father, Todd, was from Minnesota and played at the University of Maine from 1981-1984 before turning professional.  After a few years in American minor leagues, he moved to Herning where he starred for the local team from 1988 through 2000.  (Fun Fact:  Björkstrand's best years with Herning were played alongside former Vancouver Canucks winger Petri Skriko).  Björkstrand is still active in Herning hockey, as he coaches the local team he starred for, Herning Blue Fox of the AL-Bank Ligaen.  They are the country's powerhouse with 11 national championships in the past 20 years.  While Björkstrand has only been involved with coaching at the club level in Denmark, the impact he has had in developing players like Regin and Nielsen, who played integral roles in the upsets of Finland and his home country, the USA, can't be underestimated.

In recent years, Denmark has produced two NHL first round draft picks (Lars Eller and Mikkel Boedker), while having ten players drafted in total from 2002 to 2009.  It's a remarkable sucess story, and one that should definitely see Denmark qualify for their first Olympic berth perhaps as soon as Sochi in 2014, and potentially threaten the likes of Belarus, Norway, and even Switzerland for a top 10 world ranking.  Perhaps the best brains to pick would be current captain Jesper Damgaard and Jesper Duus, the two longest serving national team members.  When Duus joined the men's team, Denmark were still in the C Pool.

For now, they'll take their first 2 game winning streak in the preliminary rounds and try to beat their previous World Championships top finish:  10th in 2007, and oh yeah...  back in 1949 as well.