Winning the Memorial Cup... What does it take?

Share All sharing options for: Winning the Memorial Cup... What does it take? 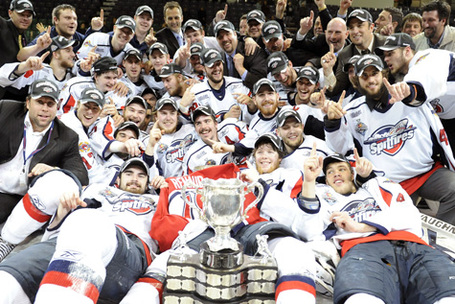 Winning it once is hard enough, but the OHL's Windsor Spitfires are looking to repeat as Memorial Cup Champions in 2010. via mastercardmemorialcup.com

Tonight in Brandon, Manitoba, the 92nd Memorial Cup tournament will be held, pitting the champions of each of the three major junior hockey leagues in Canada against each other, plus the host Brandon Wheat Kings. The Moncton Wildcats (Quebec Major Junior Hockey League), the Calgary Hitmen (Western Hockey League), and the defending champion Windsor Spitfires (Ontario Hockey League) all feature rosters with names familiar to those who actively follow U20 and U18 IIHF World Junior Hockey Championships, as well as several players eligible to be selected in the upcoming 2010 NHL Entry Draft in Los Angeles. It's been frequently referred to in hockey circles as the toughest club championship to win in all of hockey (athough the similarly structured RBC Cup for Junior A hockey is possibly more difficult), and I should know... I'm a Saskatoon Blades fan, a team who in 45 years of play has yet to win a WHL championship. They did host the tournament in 1989, losing the Final in a heartbreaker in overtime to Swift Current. If you're wondering if that's normal in junior hockey, I'll direct you to this list.

So maybe I'm not the best guy to ask about what it takes to win the trophy. James Mirtle, a Kamloops native, probably knows a lot better than I do. The tournament itself is short and sweet: each team plays each other once in a round robin. The first place team goes to the Final, the 2nd and 3rd place teams play in the semifinal. There's a chance for a 3 vs. 4 tiebreaker as well. You can win the Memorial Cup by playing only 4 games, or as many as 6. What makes winning it so tough? Getting there in the first place.

The easiest way to get to the Memorial Cup is simple: host the event itself. That seems like a good plan, but they don't just host the event anywhere. The event rotates from a city in each league, with this year being a WHL team's year. Last year it was held in Rimouski, a QMJHL city, and next year it will be held in Missisauga, an OHL market (at least in theory). Criteria for hosting the event has become a little tougher in recent years as well. Major junior hockey in Canada used to be nearly exclusively a small city circuit, but it's started to become big business, and the Memorial Cup has gone from a small end of season curiousity to a nationally broadcast event that generates millions in revenue. Junior players, who are only given weekly stipends by their teams (though they are given a billet to live with/feed them), have become national stars thanks to the popularity of the IIHF U20 World Junior Hockey Championship in Canada. So the city has to be able to support a larger event, although that does not necessarily mean the city has to be large. Brandon may be the second largest city in Manitoba, but the city is only home to about 41,000 people. The selection is not always spread out within the league itself, either. For example, an Albertan team has yet to play host to the Memorial Cup, even though there are currently five major junior teams there. 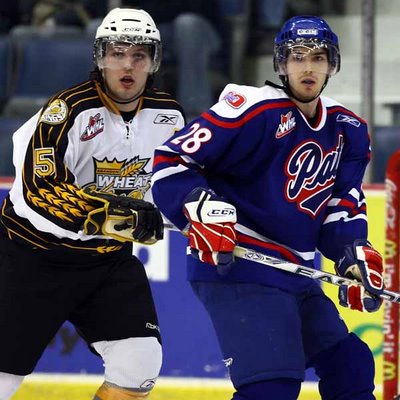 Travis Hamonic was guaranteed a berth in the Memorial Cup when he was acquired in a trade with Moose Jaw in January. via 2.bp.blogspot.com

So winning the Cup as a host is the easiest in theory, but difficult to do in practice. There's only one other way to do it: Win your league championship. There are 22 teams in the WHL, 20 in the OHL, and 18 in the QMJHL. I suppose that means that winning the QMJHL title is the easiest option, but of course you have to be a player born in their region, or drafted in the import draft by a QMJHL team if you're from Europe. Winning the league title is the same process as winning the Stanley Cup, although the regular season is 10 games shorter. 4 rounds of best of 7 hockey later, and you've got yourself a chance at this tournament.

But more than that, there's the simple age factor: You get five years, maximum, to win the trophy. That's the longest career you can potentially have in major junior hockey, and even there it's limited. 15 or 16 year old players are possible, but still rare in major junior. 20 year olds are limited to a maximum of three per team. So the vast majority of players are actually 17-19 years old, further limiting the time frame a player has to win it all. There's also the chance that you're too good, and by age 18 or 19 are playing in the NHL, although usually those players made their major junior club at 15 or 16, giving them the regular 2-3 year time frame.

So what kind of team do you need exactly? Well, let's have a look at some past winners. 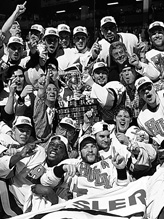 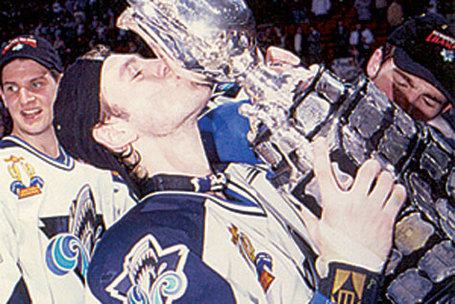 2001-02 Kootenay Ice: This team snuck up on the junior hockey world a bit, as they didn't even win their division in the regular season yet won the WHL and Memorial Cup. Jarrett Stoll, Marek Svatos, Nigel Dawes, Craig Weller, Tomas Plihal, Duncan Milroy, Brennan Evans. Coached by Ryan McGill, who was an assistant coach to Brent Sutter in Calgary this past year. 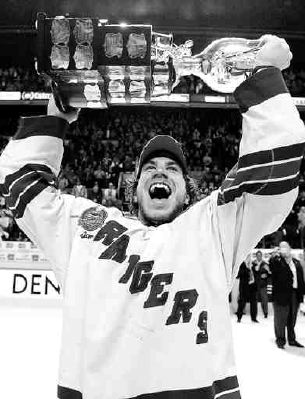 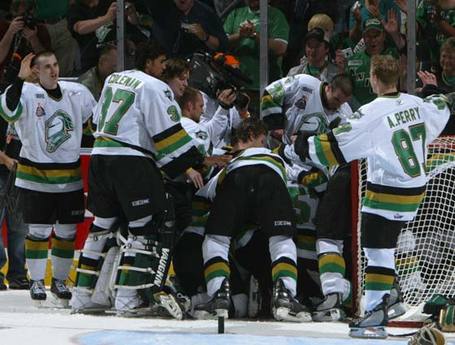 The 2005 Memorial Cup Champions London Knights, one of the best major junior teams in history. Photo via mastercardmemorialcup.com

So, generally you need 5-10 future NHLers/professionals, a potential NHL head coach, and a bit of luck to win the last of 4-6 games at the very end. So, who do I like of the current group? Well, the Windsor Spitfires are the team with all the talent, but I'm hoping for the Brandon Wheat Kings to do it. They've never won the Memorial Cup, and I'm a sucker for the smaller, more traditional major junior markets. Sorry Calgary Hitmen and Moncton Wildcats fans, I know you haven't won it before, either... but you can wait. It's been 45 years for me, and your teams just formed in the 1990s, so get in line!