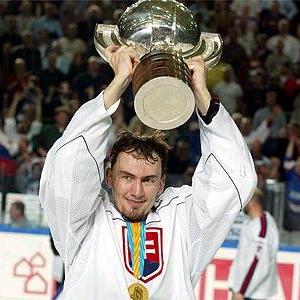 Miroslav Satan joins Slovakia today for their game against Finland via www.goironpigs.com

We have only two days left of qualification round action at the IIHF World Championships, and for some teams today is their last.  Slovakia and Finland play each other in early action (10:15 AM EST), with Slovakia desperately needing a win after getting pummeled by Denmark 6-0.  Norway's disastorous tournament will come to an end if they fail to get a win against Group F leaders Switzerland in the other early match.

In later action (2:15 PM EST), Denmark can wrap up their first ever top 8 showing at the World Championships (and a spot in the quarterfinals) with a win against a desperate Belarussian squad.  Belarus needs a win, and probably a regulation win, to have a shot at advancing.  The Czechs and Latvians play the other late game, with both teams tied for the fourth and final quarterfinal spot with Norway, so this is a huge swing game in the standings.

Stick around for some chat about the games!  You'll probably have to settle for the IIHF feed, as neither Canada nor the USA are involved in today's action.

For a recap of yesterday's Canada-Sweden game, visit The Copper & Blue.

Norway 3, Switzerland 2:  3 goals on 5 first period shots by Norway on former NHL goalie Martin Gerber was all Pal Grotnes needed to hold off the Swiss, despite a severe shot advantage for the Swiss in the game (45-15).  The win gives Norway six points, and a legitimate shot at advancing to the quarterfinals as the 4th seed in Group F.  The Swiss had already clinched a quarterfinal spot, but no longer have the stranglehold on the top spot in the group.

Finland 5, Slovakia 2:  Two offensively anemic clubs faced off against each other, and the Finns were the ones that managed to break out against the Swiss.  Jussi Jokinen led the Finnish attack with two goals, while defenseman Petteri Nummelin had a goal and two assists.  The win clinches a quarterfinal berth for Finland, as well as a spot for Denmark.  Slovakia can still make the quarterfinals with a win against the host Germans tomorrow.