Team USA Head Coach Scott Gordon is getting a lot of grief for his team's 13th place performance.  It's no wonder, he had a roster full of NHL players, a top 5 ranked country who finished fourth the previous year, and a program that recently won an Olympic Silver Medal.  On the surface, this appears to be a tremendous failure, an embarrassment for the program.  Perhaps I'm more forgiving, but I'm willing to give Gordon a pass on this one.  It'd be a shame if he never worked with USA Hockey in the future as a result.

Why would I give him a pass?  Well, for one, looking at "13th" is too simplistic.  Team USA were lumped in Group D, and while it didn't boast any of the three most successful hockey nations (Canada, Russia, and Sweden), it didn't include an obvious doormat, either.  At the  beginning of the tournament, I suggested this was the group that was most likely to produce a surprising result.  I also picked Finland as the favourite, ahead of the USA.  After the six days of competition, both those thoughts came to fruition.  The Americans lost two games in OT by a score of 2-1, first to Germany, than to Denmark.  Denmark also surprised Finland, beating them 4-1 in their opener.  And as if to prove a point, Denmark then went out and lost to Germany.  The scenario was a perfect storm, and one of the traditional powers was to be ousted.  Finland went on to beat the USA, and all of a sudden the relegation round got a lot more talented.

You can't trust any result in this tournament...  it truly is an 'on any given day' sporting event.

The relegation format is quite brutal to be honest.  3 games is all you get to determine who the top 3/4 of the teams are.  You get an additional 3 games after that to determine the top half.  Those 3 games usually sort things out a bit better.  On the last day of competition, we had a tightly fought match between Slovakia and Germany for a quarterfinal spot.  Slovakia, the more traditional hockey power, didn't win, but it was a close game and the Germans have been able to feed off the boisterous crowds to help stifle more talented opponents.  Another game saw the Czechs pull off a win against Canada in order to qualify for a spot ahead of an upstart Norwegian team.  Norway was proof positive that the game to game results couldn't be trusted:  they lost 12-1 to Canada, lost again to Latvia 5-0, yet beat the Swiss 3-2 and had beaten the Czechs earlier in the tournament 3-2 as well.

It's tough to assign a result for a team based on such a small amount of games, and perhaps that's why the IIHF uses a world ranking system that is based on the results of 4 World Championships, as well as the most recent Olympic tournament.  The USA will see their World Ranking fall as a result (they were ranked 3rd heading into the tournament and will likely fall to 5th or 6th), but they're still an elite hockey nation that could easily medal in 2011.  And as if to prove a point about the difficulty of Group D...  all three teams from that group that survived the initial cut qualified for the quarterfinals.  Yes, Denmark and Germany, those lesser hockey nations (ranked 13th and 12th respectively heading into the tournament), are still alive while Slovakia (7th) and Belarus (9th) are out.  In fact, despite USA's 13th place showing, Slovakia was only able to marginally gain on the USA's misfortune, as they finished 12th overall.

Now for some other stories that have developed over the World Championships... 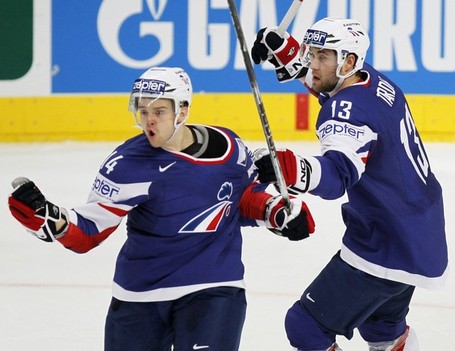