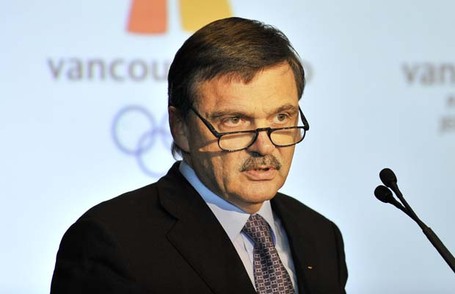 Rene Fasel, president of the IIHF. via www.vancouversun.com

What is the IIHF World Ranking?

How are points awarded?

The team that wins the IIHF World Championship gold medal or the Olympic gold medal receives 1200 points. In general, there is a 20-point interval between two ranked positions.

For example, 1060 points are awarded for the 5th place team while 1040 points for the team finishing sixth.

As an exception to this principle there is a 40-point interval between gold and silver, silver and bronze, the 4th and 5th position and between the 8th and 9th position in the top division. The reason for the larger intervals for these positions is to give teams a bonus for reaching the quarter-finals, the semi-finals, the final and for winning the gold medal.

That means although the 5th place team earns 1060 points, the 4th place team receives 1100 points, instead of 1080, for advancing to the semi-finals.

Are results from every year included?

To enable the ranking to accurately reflect current form, the greatest importance is given to results of the last year's competition. To a lesser degree, attention is also paid to results from previous years. The system uses a four-year cycle as the points earned in one year decline linearly within the next 3 years and in the 5th year results are dropped from the calculation altogether.

When is the IIHF World Ranking released?

The IIHF World Ranking will be released following each IIHF World Championship and the Olympic Ice Hockey Tournament.

That means the 2010 IIHF World Ranking will be officially released shortly after the conclusion of the gold medal match. On February 28, after the 2010 Olympic Winter Games concluded, the IIHF released this year's rankings that reflected the standings of the Olympics. The IIHF seems to be pretty quick with releasing this, as it is just simple addition.

Before each World Championship, a pre-championship report will be released, in which the values of the previous seasons are already reduced according to the above-described procedure and where only the points of the upcoming competition need to be added to get the IIHF World Ranking for the year.

Join me here after the semi-finals as I post Part II of this series!