These guys... Again? Didn't we knock them out already?

Share All sharing options for: These guys... Again? Didn't we knock them out already?

The Memorial Cup is an interesting format to determine a national championship.  Rather than a series of Bowl games like in NCAA football, or a straight up bracket like NCAA baskeball or hockey, the Memorial Cup throws that interesting little twist of having a host city and team for the grand finale.  There are three league champions based on region, and one host who also played for the championship of one of those three leagues.  In this case, the Brandon Wheat Kings (hosts) and Calgary Hitmen (WHL champions) even played each other in the WHL playoffs, and shared the same conference, forging a genuine rivalry in the process.  In most of the Memorial Cup games, the prize is what fuels the rivalry, and sometimes a provinicial/national rivalry not really specific to the teams involved.  But in the Case of Brandon/Calgary, we actually get to see two teams that have, all season long, used each other as measuring sticks while they chased the national title.

Tonight, the final chapter of the 2009-10 rivalry will be played out.  And while recent results have been one-sided (Calgary has won the last five games, including on Wednesday night), it really doesn't matter to this point for Brandon.  Sure, an Ed Chynoweth Trophy (awarded to the WHL champion) would have been nice, but all along the goal has been to win the Memorial Cup at home.  For Calgary, they had to go through Brandon just to get to Brandon.

Here's a quick look at how the season matchups have looked to date, in advance of tonight's semifinal:

Jacob De Sarres hadn't arrived yet for the Wheat Kings (he started the year with the Seattle Thunderbirds), and Martin Jones wasn't available, either, so current backup goalies Michael Snider (Calgary) and Andrew Hayes (Brandon) got a chance in this evenly contested affair.  Calgary's Kris Foucalt had two goals and an assist, and Brandon captain Matt Calvert scored twice to push the game into a shootout, which Calgary won 2-1.  Brandon D Ryley Miller provided the early hate, getting in a fight with Calgary's Cody Beach in the first period, before getting called for checking from behind and having to deal with Ian Schultz, who was subsequently ejected for instigating.  Ah, the good old 'Dub. 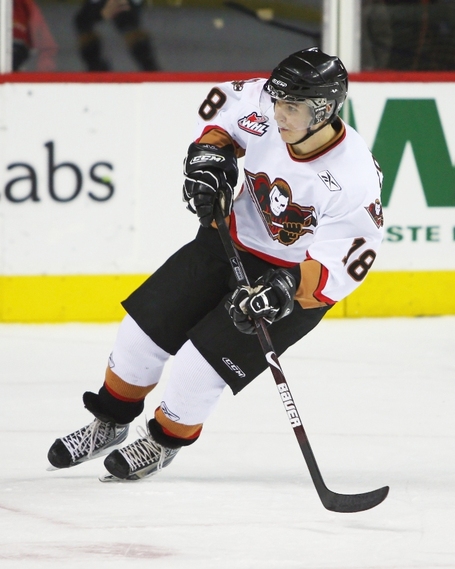 Kris Foucault of the Calgary Hitmen has played a huge role in the Brandon/Calgary season series via www.whl.ca

The second meeting in Brandon went more to the home side's liking.  Martin Jones got his first look at Brandon's shooters, and he got a lot of them, facing 41 shots in total and surrendering all five goals.  Hayes again started for Brandon, despite the presence of De Sarres.  A Matt Calvert goal with one second left in the second made it 3-2 Brandon, capping off a 20 shot barrage in the period and the Wheat Kings sealed the deal in the third.  Tony Rajala scored twice to lead the offence.  There were no fights in this rematch, despite 28 minutes of penalties being dished out.

The season series shifted to Calgary, where the Wheat Kings made a stunning third period charge in a battle of what were, by then, clearly two of the top teams in the league.  Again, a lot of penalties were awarded (34 PIM total), but no fights occured.  The real story was on the ice, where Calgary built up a 3-1 lead based on two goals and an assist by Tyler Shattock, and looked to be in full control with just over twelve minutes to play.  Then, Scott Glennie scored twice in 41 seconds to tie the game, and Colby Robak, Brayden Schenn, and Matt Calvert got a goal and an assist each in the final five minutes to shock the hometown crowd.  This was Jacob De Sarres' first taste of the rivalry. 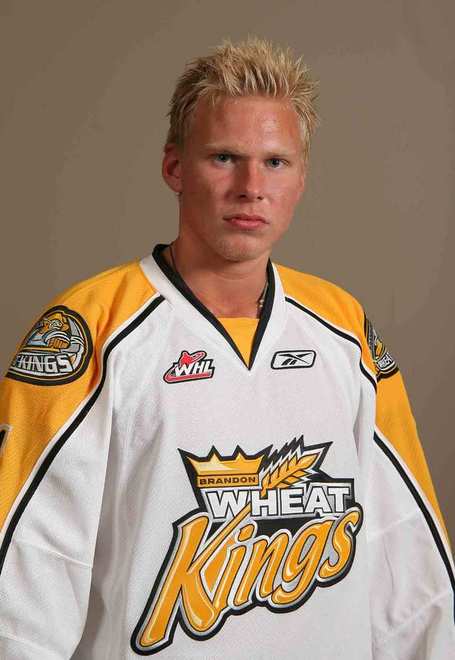 Alexander Urbom was the hero on Feb. 15.  Photo via cluster.leaguestat.com

The hate between the two teams began to creep back into this one, and Brandon D Alexander Urbom became the story by the end of the game.  Urbom scored the final two goals, got into a scrum with Tyler Shattock, and got a checking from behind penalty late (though he wasn't ejected) to register first star honours in the 4-2 road win.  Miller and Beach renewed acquaintances from their early season tilt, and both Adam Lewadniuk of Brandon and Brandon Kozun of Calgary scored their 30th goals in this afternoon game.  The regular season series ends with Brandon taking 7 out of 8 points, though both teams know they'll likely see each other if they make it to the third round.

The WHL's Eastern Conference Finals begins with Brandon winning their third straight game at the Saddledome.  Trade deadline acquisition Travis Hamonic led the Wheat Kings with a goal and an assist, and Brayden Schenn scored the game winner 9:03 into the third period.  This being the playoffs, the teams are much more disciplined, with only five penalties called and each team scoring once on the PP.  De Serres makes 33 saves to take away home ice from the Hitmen.

These being junior aged players, playing back to back nights even in the playoffs is a fact of life.  An early 2-0 first period lead by Calgary was quickly erased in the second as Brandon scored twice to tie up the game.  With their backs against the wall, Calgary responded with a strong third period, but were unable to beat De Serres and OT was the result.  Early in OT, what had been an undisciplined affair turned terrible for Brandon, as Scott Glennie took an early penalty for checking from behind, followed 29 seconds later by Alexander Urbom with a high-sticking minor.  The Wheat Kings couldn't kill of a 5 on 3 for 1:31, as Ian Schultz scored 2:23 into overtime to even the series.  The Hitmen never looked back from this moment, as it was the first of seven straight wins en route to winning the WHL title. 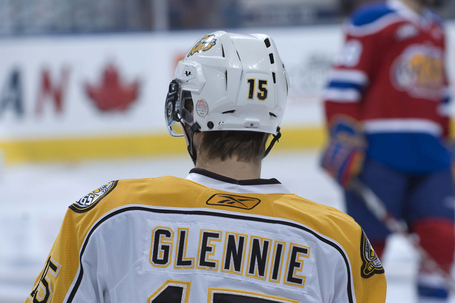 Scott Glennie will need to come up big for Brandon tonight.

While the Wheat Kings might have felt good having earned a road split to kick off the best of 7 series, they surely didn't feel too good after this one.  The dam burst on Jacob De Serres early and often, as the Hitmen erupted for four first period goals on just ten shots.  Meanwhile, Martin Jones stopped 21 first period shots before the Wheat Kings mounted a comeback in the second...  or more specifically, captain Matt Calvert did.  Calvert got a natural hat trick, including two shorthanded goals, to set up a tense third period.  Martin Jones stood tall in the third before Tyler Fiddler made it 5-3 with just 1:50 to play.  Fiddler also added an empty netter as the Hitmen took a 2-1 series lead despite being outshot 43-21.

Early goals by Urbom and Rajala gave the Wheat Kings a 2-0 lead after one, but a second period outburst by the Hitmen negated the quick start.  Two goals by Kris Foucault helped the Hitmen to a 3-2 lead after two, and Joel Broda expanded the lead to 4-2 before Brenden Walker made it 4-3 with just under 3 minutes to play.  Jones made 34 saves as the Wheat Kings began to doubt De Serres' ability, turning to Andrew Hayes for the first time in 2010 vs. the Hitmen.  Calgary returned home with a 3-1 series lead, and after overcoming such a 3-1 deficit themselves in Round 1 vs. Moose Jaw, they had little desire to head back to Brandon for another game.  Brandon's PP was their downfall, as they went 0 for 6 on the night.

The Wheat Kings went out with a wimper as Calgary blew out their rivals with the intention of seeing them again in May.  Brandon Kozun finally had a great game against the Wheaties, notching two goals and two assists as the Hitmen outshot Brandon 39-21.  Jacob De Serres returned to goal for the Wheat Kings, but it didn't matter.  Knowing they could meet again, there was some message sending, as 5'10" Brandon captain Matt Calvert fought with 6'2" defender Matt MacKenzie in the second period.  The Hitmen then saved their energy for the WHL Final and made quick work of Tri-City, winning that series in 5 games after winning the first three games. 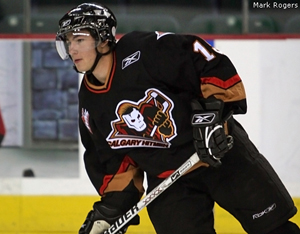 Brandon Kozun hopes to return to Calgary's lineup with a huge night tonight.  Photo via www.nsd365.com

Technically Calgary was called the home team, but this meeting was the fifth of the year at Westman Place in Brandon.  The game was almost academic, so Brandon can be excused for yet another lame effort, but the win will give Calgary last change in tonight's semifinal.  De Serres again had a rough outing against Calgary, allowing 5 or more for the third straight game to the Hitmen.  All the goals were scored in the first period, as even without Brandon Kozun (who will return tonight after recovering from an ankle injury), the Hitmen proved to have too much offensive punch.  Foucault, Tyler Bubnick, and Tyler Shattock led the way for the Hitmen in this easy win.

After all is said and done, the Hitmen have a 6-4 record against Brandon this season, and are riding a five game winning streak into tonight's do or die semifinal.  The winner gets a second chance at the Windsor Spitfires, who beat both these teams in the round robin quite handily (Brandon lost 9-3, Calgary lost 6-2).  It's quite unique to play a team ten times in one year and still not have decided the better team, but Brandon has a unique chance at home tonight to win the war...  even if they lost more battles.

Puck drop is at 8 PM EST, broadcast on Sportsnet in Canada and the NHL Network in the USA.  Sportsnet is also making the game available via webcast.