There were some unexpected results, although most of that occured at the top of the standings.  Teams that placed five spots above their previous world ranking included the World Champion Czech Republic, who were ranked sixth in the world heading into the tournament.  Germany and Denmark also surprised the top level competition, finishing eight and five spots above their pre-championship world ranking respectively.  On the flip side, it was an awful tournament for the North American teams, as Canada finished seventh and the USA finished twelfth, despite Canada being ranked #1 in the world heading into the tournament and the Americans being ranked 3rd. Slovakia also had a poor showing, finishing twelfth despite being a pre-championship ranking of seventh.  The Slovaks can take solace in the Germans strong showing, though, as they will be the hosts next year and should be able to rebound as a result.

As a result of these finishes, Germany rose three spots in the World Ranking to 9th after their fourth place finish.  This marks their highest placing since 2004 (when they were ranked 8th), and is a remarkable accomplishment considering they finished 15th at the 2009 World Championships and 12th at the 2010 Olympics, not winning a game at either tournament.  Meanwhile, the Americans were the biggest fallers in the whole of the IIHF Rankings, dropping from third to sixth overall.

User dleung17 has already explained the rankings system, and provided the updated world rankings and next year's Championship division, so I apologize for any overlaps.  But the following chart shows the rankings in their entirety, and who will be advancing to the next World Championship level and who will be relegated.  Join me after the jump for a snapshot of the hockey world as of 2010:

As you can see, the IIHF covers a lot of hockey.  The World Ranking metric has it's problems, but most of those relate to the top end of the bracket and how they equate each World Championship as having the same value as the Winter Olympics.  That being said, since we all know that the Americans truly are an elite hockey nation and that Germany and Denmark are second tier ones, this measurement takes enough accounting for the occasional bizarre result and provides a more believable scenario.  It's not perfect, but it's reasonable.

We can see now that once we get into the nearly permanent relegation territory of 14-20 the movement gets pretty static.  Austria was actually not too far behind Denmark, but due to a technicality had to play in Division 1 this past year, and while they easily returned to the Championship Division, Denmark's strong showing opened a 250 point gap (it was only 50 points previously).  So Austria, who has in the past flirted with second tier nations like Germany, Norway and Latvia, now face an uphill battle to avoid the relegation round, and that could affect their Olympic Qualification hopes for 2014.  However, they will be a welcome boost in competition to the 2011 IIHF World Championship in Slovakia.

Countries like France, Italy, Kazakhstan, Slovenia, Ukraine, and Hungary have seen action at the Championship Division level in recent years, but have always had to be placed in the relegation rounds and have yet to truly advance their standing in the world, meaning their world ranking remains relatively static.  Below them are countries we never see at the top level, and for the most part those country's programs aren't improving relative to the countries ranked around them. 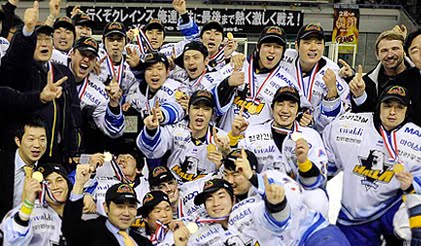 Korean hockey is on the rise.  Photo of Asia League Champions Anyang Halla, via 1.bp.blogspot.com

The only true country that appears to be advancing their hockey program relative to the competition is South Korea, who recently placed 25th by finishing 5th out of 6 teams in the Division 1, Group B tournament in Slovenia.  At that tournament, they only won a single game, defeating Croatia 5-2, but played competitive hockey against every nation, save an 8-3 loss to the hosts.  South Korea was not ranked high enough to participate in the Olympic Qualification for 2010, but their current standing suggests they are better than countries like Spain, Mexico and Turkey that did participate. To participate in the 2014 Olympic Qualification tournaments, nations have to be ranked 30th or higher at the 2012 World Ranking.

The other curiousity on this list is obviously Armenia's disqualification.  They joined the World Championship circuit for 2010, and even hosted the Division 3, Group B tournament in the capital city of Yerevan.  After finishing second, losing the Gold Medal Game 5-2 to North Korea, the IIHF investigated their roster and determined several of their players (particularily Armenian-Americans) were ineligible to participate, and they have now suspended the national federation's membership as a result.

Based on the results in the above chart, the IIHF has determined where next year's tournaments will be held.  All of the information for every announced IIHF tournament can be found here, including the various Women's and Junior tournaments that will occur.  Here is a listing for the Men's World Championships for 2011:

Greece won't participate in the World Championship tournaments next year, and the Challenge Cup of Asia site has yet to be determined.  The countries listed in that bracket were the ones that participated last year, plus India who are expected to make a return to the tournament in 2011.  As a result of Greece's absence and Armenia's suspension, there will only be one Division 3 level tournament, and the top two qualifiers at that tournament will earn promotion to Div. 2.