Czechs Come Up Rosy at Worlds

Share All sharing options for: Czechs Come Up Rosy at Worlds

When the NHL season ended, and the invites to play in the IIHF World Championship in Cologne and Mannheim started to be issued, no country had more significant rejections from their top players than the Czech Republic.  After losing in the quarterfinals to Finland at the 2010 Olympics, many Czech players had soured on head coach Vladamir Ruzicka and the direction of the national program.  In the end, only one NHL skater (Jakub Voracek) and two NHL goalies (Tomas Vokoun and Ondrej Pavelec) signed on to the team, and the Czechs were left scrambling to form a roster primarily based on players from the KHL and the O2 Extraliga.  While other national programs specifically targeted a younger roster, the Czechs took who they could get, and often ended up with players that had little international experience not because they were young, but because of their merit.  It was a rag tag crew that would need to claw for every point and victory they could get.

Some teams embrace that role, and learn to excel in it.  Others, like Team USA's 2010 edition, fail before they can embrace that identity and finish badly.  The Czechs took a while to play the kind of hockey Ruzicka demanded of his crew, but eventually that stifling defensive style paid off with four straight wins over four countries ranked ahead of them in the world.  They got some incredible fortune, and they needed two shootouts to pull it all off, but in the end, this team was good enough to win it all for the first time since 2005.

Czech hockey hit its modern peak at the turn of the century.  After winning gold at the 1996 World Championships, the men's team followed it up with a surprising gold medal at the 1998 Nagano Olympics, the first Olympic tournament in which NHL players participated.  The team famously rode Dominik Hasek's stellar netminding to victory, allowing only two goals in three playoff games against more highly rated nations like the USA, Canada, and Russia.  The coach of that team, Ivan Hlinka, was highly regarded by the Czech hockey community, and became like a Herb Brooks type figure in the program.  The captain of that team would inherit the burden of those expectations upon Hlinka's tragic death in a car accident in 2004.  That man was Vladamir Ruzicka. 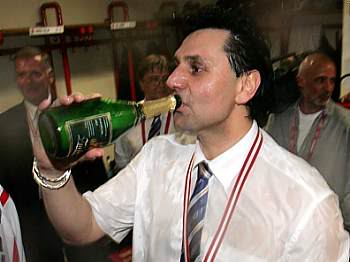 Vladamir Ruzicka is used to being doused in champagne.  via img.photobucket.com

This kind of mediocrity doesn't lend itself well for the future.  It's been ten years since the Czechs were the undisputed rulers of the hockey world, and in Hlinka's absence, the national program has lost it's luster.  This year's team seemed to offer even less hope than usual.  Before the Czechs final round robin game against Canada, the team needed a single point in order to just qualify for the quarterfinals.  Our resident Czech hockey fan/expert, Czechboy, made the bold assertion that this was the "worst Czech team ever".  Things weren't looking good for Ruzicka's men, but faced with adversity the team prevailed.  Tomas Vokoun, a goalie who has yet to have success in the NHL playoffs, became the backbone of the team as they went on a low scoring, defensive clinic not unlike the 1998 Olympic Champions.  In fact, the run on teams was as impressive as that 1998 group:  first Canada, followed by Finland, Sweden, and yet again Russia in the finals. 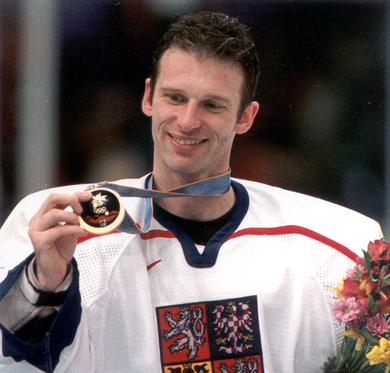 Dominik Hasek, with his 1998 Olympic Gold Medal.  Photo via www.woaolympians.com

Is this a mere blip on the radar for the Czechs?  Probably.  But perhaps these kinds of victories can help bring further attention to the sport, as it appears to be losing steam in recent years in the country.  According to IIHF numbers, youth only make up a third of their registered players in the Czech Republic, which is very low when compared to other nations.  Jaromir Jagr and Dominik Hasek, though they may try, won't be around forever to advance the profile of the nation.  Perhaps this team full of national league stars can inspire young Czechs at the local level, bring more people to Extraliga games and bring a demand for youth hockey again.  It'd be a shame if this hockey power fades into the background.

As for Ruzicka, he leaves the national team (for now) a champion.  He's captained the national team to Olympic glory, and coached the team twice to the title of World Champions.  It will be interesting to see who the Czechs get to replace him, as Ruzicka has had arguably the most success of any Czech coach besides Hlinka.  A strict international rule gave the Czechs a quarterfinal loss to Finland, 2-0, at the 2010 Olympics, as Pavel Kubina had to abandon his defensive assignment to pick up his helmet, which had fallen off.  The goal was the only one Ruzicka's defensive posture allowed (aside from an empty netter), and that defensive structure paid off against the lesser talented teams at this year's Championships.  Unforutnately for him, it was only the end result that mattered:  7th place at the Olympics.  Now, the NHL players refuse to play for him, and he will be replaced.

But not without one last golden moment.