Share All sharing options for: Welcome to Puck Worlds! 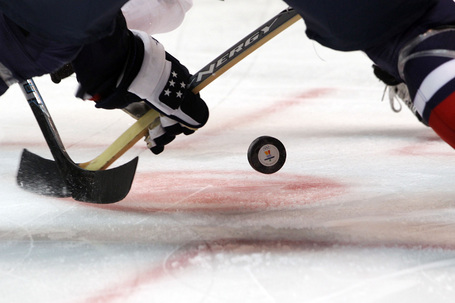 Hi, puckheads!  Allow me to introduce this blog, and myself, to you.  My name is Bruce Peter, and I'm commonly known around SB Nation under the username saskhab.  I'm a fan of the game first, and blogging is something I've had a casual relationship with in the past.  After working the 2010 World Junior Hockey Championship in Saskatoon for Yahoo!'s Puck Daddy, I definitely developed a bit of a bug for the international game.  I've always loved the best on bests, and have followed closely the higher profile tournaments in the past, but seeing a wide range of young players excited for the opportunity to star for their country, no matter how long the odds, gave me a real desire to explore the game beyond what I was familiar with.

So what exactly will this blog be covering?  To start with, the 2010 IIHF World Men's Championship in Germany will be the launching point of this site.  There are sixteen nations ready to try and get some bragging rights, and every one of them has something to play for.  For the elite nations, it's a chance to end the hockey season with a medal, preferably gold.  For the middle tier of nations, it's the chance to pull of an upset of one of the top nations, and continue to build their international legacy.  For the teams outside the top 10 or 12, it's simply for the right to continue to play with this group.  Austria and Slovenia have already earned promotion for next year's tournament in Bratislava, Slovakia, and the bottom two teams at this tournament won't be back next year.

But the IIHF World's are not all that is happening outside the NHL this month.  In Canada, the CHL's Memorial Cup takes place in Brandon, Manitoba, from May 14th to the 23rd.  Each of the three Canadian Major Junior leagues are in their league finals, and the winners of those will join the host Brandon Wheat Kings for the chance to play for what has been called the most difficult hockey club championship to win.

In short, Puck Worlds is going to cover high level hockey, wherever it's being played.  SB Nation has the NHL covered, with 33 blogs dedicated to following every game that is played, every player transaction, and every player's performance.  Here, we're going to follow the game from Moose Jaw to Timbuktu...  or at least Turku.  For every major international tournament, this will hopefully become one of your go to sites.

There will be some tinkering going on with the website in it's infancy...  I'll have a full compliment of links to other relevant websites and blogs up shortly.  In the meantime, feel free to join up and make suggestions on what you'd like to see covered on this site.