With the tournament kicking off on Friday with a game between the hosts Germany and the USA in front of an anticipated audience of over 76,000, we might as well look at the teams in Group D first.  While the preliminary round groupings can hardly be viewed as deep, Group D is one that has at least a small chance to produce some surprising results.

Lars Eller headlines a young Danish core in 2010 and beyond.  Photo via www.dr.dk

Denmark is a country on the rise in international hockey, as they have started to produce some strong, almost elite level prospects like Lars Eller and Mikkel Boedker, to go along with strong two way forwards like Frans Nielsen, Peter Regin, and Jannik Hansen.  Boedker and Hansen aren't on their roster as of right now, but one of them could still be added if they become available (there is no word on Boedker's status, although he did not have a strong AHL campaign).  Veteran Kim "The Really Other" Staal has been a fixture of the Danish national team for years, and may finally be ready to hand over some of the offensive load to the young core of players coming up.  On the blueline, the Danes have had only one player play in the NHL, and that was 20 year old Philip Larsen for a late two game stint with Dallas.  He'll likely play a top 4 role at the tournament, along with Swedish leaguers Jesper Damgaard, Mads Boedker (Mikkel's older brother), and Stefan Lassen.  In goal, longtime veteran Peter Hirsch, who helped the Coventry Blaze of the EIHL to a regular season title, will probably split time with Patrick Galbraith.  Galbraith is a 24 year old who played for IF Bjorkloven, a former Elitseren power (but recently playing in the second tier Allsvenskan) who recently declared bankruptcy.

The team's goal is quite simple:  collect enough points in the preliminary round, finish third in the group to avoid the relegation round.  However, that may be difficult for the team this year, with two strong opponents in Finland and the USA likely getting through, and the similarly talented German squad playing in front of boisterous home crowds.  This team has managed to stay in the elite group since first getting promoted for the 2003 World Championship, finishing as high as 10th in 2007.  They finished 13th last year, as the top team in the relegation round. 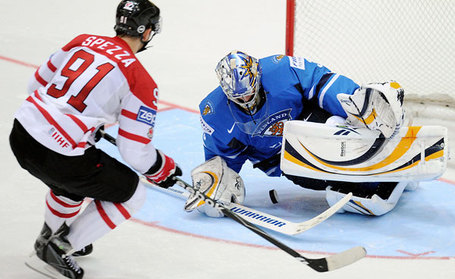 Snubbed for the Olympic team, Finland's Pekka Rinne gets his chance at national glory this May in Germany.     Photo via www.thehockeynews.com

Like most of the top nations, Finland is going with a completely overhauled roster for this World Championship, focusing on breaking in some younger players like F Oskar Osala and D Sami Vatanen, while rewarding veterans like former NHLers F Sami Kapanen, D Petteri Nummelin, and F Riku Hahl for their long term service to the national program.  It's a bit of a smaller group than we've seen from recent Finnish teams, but their reputation for punching above their weight in international competition is well known, so expect Finland to be around in the semifinals despite being offensively challenged.

Some intriguing players to look for on Finland include Anaheim Ducks draft pick Vatanen, an offensive defenseman who starred at the 2010 World Juniors, and St. Louis Blues draft pick Jori Lehtera, a slick playmaking centre who had 19 goals and 50 assists with Tappara in the SM-Liiga.  Despite the team's lack of high profile stars, Finland should be considered the favourite of Group D, backed by Pekka Rinne's goaltending and plenty of past World Championship experience. 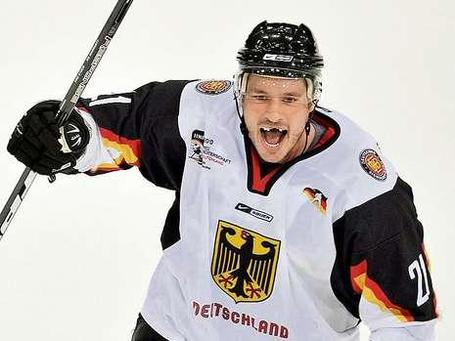 Kingston, Ont., born John Tripp is all smiles to play in front of his home fans in Germany.  Photo via www.bild.de

Germany was able to qualify for the 2010 Winter Olympics, but has struggled to grow their national program.  Indeed, for a country that was given an entry in the eight team World Cup tournaments in 1996 and 2004, Germany has definitely fallen behind many of the nations in its peer group.  Switzerland and Belarus have emerged as the strongest teams in the challenger group (below the top 7), and even Norway and Latvia have put together stronger national teams in recent years than Germany.  With Denmark right behind them in the World Rankings, this tournament on home ice is a big chance to make a climb back up the rankings...  but unfortunately for them, there isn't a lot of reason to hope for a big showing with this roster.

Long gone are the days of Olaf Kolzig helping keep this team competitive, now even the nation's top goaltender, San Jose Shark backup Thomas Greiss, remains in North America for the NHL playoffs.  Fellow Olympian Dmitiri Patzold did not come, either, leaving the reigns to Spartak Moscow goaltender Dimitri Kotschnew.  As for who is going to score goals for this team, that's anyone's guess.  Marcel Muller and Patrick Wolf were the top scorers of the DEL players that make up a majority of the roster, and Marcel Goc is coming off a career high in the NHL...  of 12 goals.    The country's top NHL forwards, Jochen Hecht and Marco Sturm, are both injured (and Sturm's Boston Bruins are still in the playoffs regardless).  Muller remains the team's best hope:  a point per game player in Germany's top league at age 21.  Expect Head Coach Uwe Krupp to try and keep the scores low in this one.  No doubt about it, the team's best hope to avoid the relegation round is to knock of Denmark in their third game. 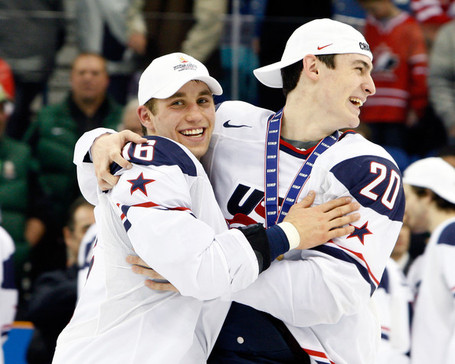 With all those NHL players, you'd think that this pool was Team USA's to lose.  However, it's a very inexperienced group heading to Germany, and it includes some fringe NHL talent (Taylor Chorney, Mike Lundin, Christian Hanson).  Their number one goaltender is journeyman Scott Clemmensen, more noted as a minor league veteran than a proven NHLer.  It's an interesting collection of players led by young forwards like Oshie, Dubinsky, Okposo, Nick Foligno, Tim Kennedy and T.J. Galiardi.  The blueline is headlined by Johnson and Keith Yandle, with Andy and Matt Greene likely filling out the top 4.  To emphasize the youth, the greybeard of the team, other than Clemmensen, is David Moss at 28.  Chris Kreider, a New York Rangers draft pick, gets the rarest of opportunities, playing in the World Championships while still an amateur player for Boston College.  Kreider not only won a World Junior gold this past year, but a NCAA national title with the Eagles.

While the USA program has had a lot of success in 2010 with the Olympic silver medal and the World Junior gold, the World Championships have proved to be quite a different story altogether.  Last year, the Americans finished fourth, and their last medal was in 2004, a bronze.  In the lifetimes of the entire roster (Scott Clemmensen was born in 1977), the Americans have only captured two bronze medals total at this tournament.  With a lot of the European teams not dressing a lot of NHLers, this might be USA's best chance to get to the podium in years.  However, with a lack of depth in goal (Clemmensen is backed up by AHL goalie Ben Bishop and SM-Liiga goalie David Leggio) and their reliance on youth the team's chances of staying in the tournament into the final weekend seem low.