The 2010 IIHF World Championship opens up in the two main host cities (Cologne and Mannheim) today.  Cologne will host continued Group D action, while Mannheim will serve as the venue for Group B, a group that includes Italy, Latvia, Switzerland, and of course, top ranked Canada.  It probably won't make for the most exciting hockey, but with Latvia involved, at least the fans will have a good time.  Join me after the jump for a look at the four teams.

Rest of Lineup:  Not a single player wasn't in the NHL this year, although Jordan Eberle attended a pre-tournament camp and could conceivably be added to the roster late 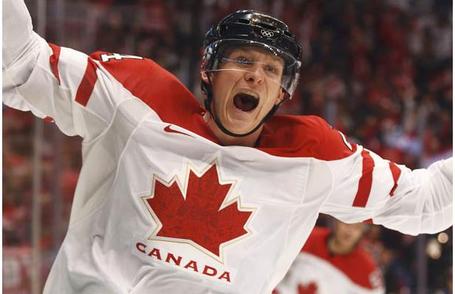 Corey Perry will join the IIHF's Triple Gold Club if Canada wins the World Championship in Germany.  Photo via www.vancouversun.com

Not unlike USA and Finland, Canada is quickly turning the page from their Olympic roster with an eye on developing players for future best on best competition, whether that is a World Cup or Olympic tournament.  Even with that deliberate look to the future, the Canadian roster looks like a stacked deck in terms of goal scoring talent up front:  Rocket Richard Trophy winner Steven Stamkos leads the way, but he's quite capably surrounded with Matt Duchene, Perry, John Tavares, Lightning teammate Steve Downie, and veterans Ryan Smyth and Ray Whitney.  The blueline is led by likely Calder Trophy winner Tyler Myers, Marc Staal, Brent Burns and relative greybeard Francois Beauchemin.  St. Louis Blues netminder Chris Mason returns to the World Championship level, having helped Canada win gold in 2007 at Moscow.

One thing we know for sure is that Canada won't be very fun to play against.  Perry, Downie, and Steve Ott are top rate NHL agitators, while team captain Ryan Smyth is a goalie's nightmare with his consistent crease presence (though they are stricter about that in international play).  Brooks Laich is no slouch in front of the net either, and the blueline is anchored by a young man who is all of 6'8" in Myers.  With Craig MacTavish hoping to use this tournament as a launching point for another NHL job, expect Canada to play physical and dictate the flow of every game they are in.

For the preliminary round, the goal will be to create sustained pressure and score early and often...  running up against a top goalie always seems to happen in a tournament like this, and the pesky Swiss often have given Canada fits.  The goal, as always, is to build towards a peak performance in the playoff rounds.  In these early games, the scores could get ugly.

Notable absentees:  none, or if there are any I have no idea who they are anyways 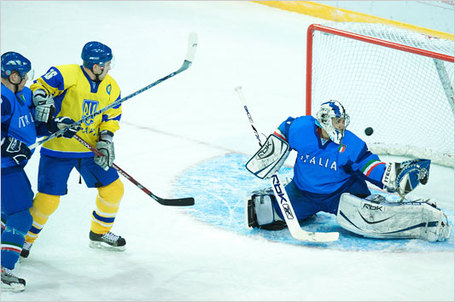 Yep, some Italians DO play hockey.  via graphics8.nytimes.com

Teams like Italy are interesting to look at.  In 2006, the Italians nationalized a bunch of North American hockey players in order to field a somewhat competitive team for the Turin Olympics, and the ability to obtain eligibility to play for the Azzuri is still quite simple.  Looking at the team's statistics at last year's Division 1 World Championships in Poland, one of the Italy's top players is Trevor Johnson, a former WHLer from Trail, BC.  Johnson, an undersized defenseman, managed eight points in five games to help Italy earn promotion back to the top level.  Italy's top homegrown talent is Roland Ramoser, and he's getting up there in age (now 38).  I'm not sure how tall he is (on the IIHF roster he's listed at a massive 6'8", but on his Hockey Database account he's 6'3"), but he's returning to Germany where he played in the late 1990s before returning to his hometown of Bolzano to play for the local Serie A team.

Stealing a point off of Latvia or Switzerland isn't impossible, but it's hard to imagine a scenario that sees Italy not finishing last in this group and joining the relegation round.  Even while there, they will likely need to pull off an upset to avoid not finishing in the bottom two spots, and heading back to the Division 1 level.  Let's face it, this is a team that has pulled a player from the Port Huron Icehawks of the IHL to play for them at the World Championships (goaltender Adam Russo).  They aren't challenging many teams at this tournament. 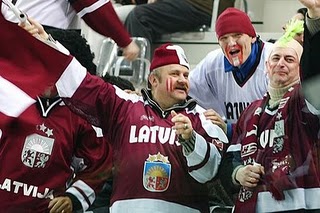 The real stars of Latvia:  their fans.  Photo via 1.bp.blogspot.com

Every player's first name ends with the letter s, and almost all their last names do as well.  The small Baltic country is one of the most passionate hockey countries in the world, and at every World Championship, their fans are known to party the hardest.  Expect boisterous chanting, dancing, and drum beating throughout Latvia's matches.  It sometimes has been known to be intimidating for the Latvian players, as their fans demand a high quality of play from their team despite their middle of the pack standing (ranked 11th in the world).

To help deliver that quality of play, Latvia will rely on some relatively inexperienced international players, most aged about 24-26.  About half the team plays together on Dinamo Riga of the KHL, the only Latvian club in Europe's top league.  Martins Karsums even joined the team part way through the year after Tampa Bay decided he wasn't need in the NHL anymore.  Karsums, Janis Sprukts, and veteran Herberts Valsilievs will have to be the offensive catalysts for the team.  Goaltender Edgars Masalskis returns from the Olympic team after outplaying former NHLer Martin Prusek for the #1 job in Riga.

The Latvians will try and play things tight against Canada, look to beat Italy relatively handily and then try and score a minor upset against Switzerland.  As long as they beat Italy, they should advance, but Switzerland is within reach. 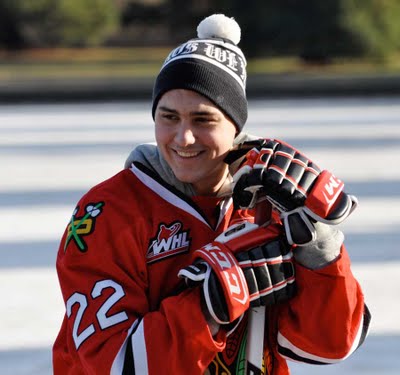 At 17, top 2010 NHL draft prospect Nino Neiderreiter is the youngest player at the World Championships.  Photo via 3.bp.blogspot.com

While Switzerland continues to make strides in the hockey world, their national teams have had to rely mainly on goaltending and defence to compete with the elite groups.  That isn't about to change overnight, but the emergence of Nino Niederreiter to the top levels of hockey is a promising sign for the country.  At the 2010 World Juniors in Saskatoon, he made my job covering the tournament quite easy, helping Switzerland to a surprising 4th place finish with a big upset of Russia, scoring the tying goal in the final minute, and then the OT winner.  He's expected to go in the top 10 of the NHL Entry Draft.  It's hard to say how much offence he will provide at this level at his age, but any offence from him has to be considered a huge boost to their program.

Unlike previous years, there are no Canadian born players on this year's team, which has to be considered another plus going forward.  Switzerland is now producing enough players within their own country that veteran Canadian trained players like Hnat Dominecelli and Paul DiPietro playing for them might be a thing of the past.  Along with Niederreiter, forwards Martin Pluss, Felicien du Bois and Andreas Ambuhl should lead the team offensively.  The Swiss have relative strength on the blue line, with young Roman Josi joining veterans Julien Vauclair, Timo Helbing, and Goran Bezina to form a group that is used to having NHL All-Star Mark Streit playing half the game.  With no Streit in front of him, Martin Gerber will be tested a little more this tournament, as the former NHL goalie is given a chance again after 2010 Olympian Jonas Hiller decided not to participate this year.  He's capably backed up by former Dallas Stars goalie Tobias Stephan.

Switzerland is known for manufacturing upsets, but Canada will be wary of them in this early round as they are the top opponent.  Will they make Canada work for the win?  Likely.  But Switzerland's main game has to be against Latvia, as a victory there should get them 2nd in the group and a more favourable schedule in the qualifying round.