That's a Hell of an Idea

Share All sharing options for: That's a Hell of an Idea

It's a shame that most hockey observers in North America only took note of the World Championships this year because of Szymon Szemberg's ridiculous swipes at NHL stars who passed on the event, and the subsequent backlash to the column that was posted on the IIHF website (and since removed).  "Saying No To Your Country" was definitely a newsworthy story, but it gave legitimacy to a brand of hockey fan that dismisses these events altogether.  Steven Ovadia wrote on Puck Daddy about the need for the NHL to hold their own international tournaments, to discourage participation of their contracted players at events where the NHL does not see financial benefit from.  He used as source material for the argument Brian Burke's suggestion that the World Championships not be held in an Olympic year.  I'm all for new suggestions on international competition, but it seems to me this debate is awfully one-sided on this continent, so I'm going to take up a different point of view.

Let's cancel the Stanley Cup playoffs during an Olympic year.

There's really no point to the competition in the Olympic year.  All year long, hockey commentators are putting together predictions for the rosters of the national teams, and players are working hard to impress the national federations who are scouring the professional ranks for the best of the best.  The NHL regular season serves it's purpose:  it helps teams sort out their tough decisions, and the fans are looking out for these players as well.  The season is jammed packed with excitement, anticipation, constant pressure to perform to one's best:  the NHL regular season from October to December has it all for a change. 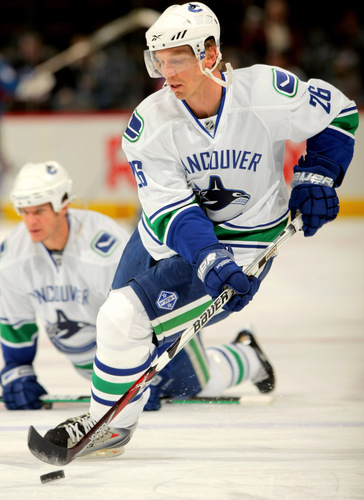 Mikael Samuelsson wasn't too happy about missing the Olympics.  He didn't display the same disgust after bowing out of the Stanley Cup Playoffs.  Photo via cdn.bleacherreport.net

Of course, there's that let down period after Christmas.  The Olympic rosters are announced, and the dog days of the regular season kick in.  Some players, ticked off for not getting selected, go on a scoring tear out of spite.  Others slump and leave everyone second guessing their selection before they've even played a meaningful game.  Not only that, but the season is so rushed that even the fans are getting worn out.

Then the Olympics come.  And boy, are they fun to watch.  Each game means a lot, and the pace is frenetic.  Could you honestly follow the puck in that Canada-Russia quarterfinal's opening period?  I'm a lifelong hockey fan from small town Canada, watching the game in HD and I was almost asking for a glowing puck because of how quick the play went.  It was incredible hockey, even though that game ended up being a bit of a blowout.  The jerseys, almost completely absent of corporate logos, are stunning.  And the atmosphere can't be topped.

When all is said and done, the Games are a huge success.  But then the NHL, greedy as it is, starts up the day after the gold medal game with Detroit vs. Colorado.  There's no rest for the players, and luckily for the Red Wings, Sweden didn't play for a medal this year, so they don't have to forfeit on account of their players still being drunk from the night before. 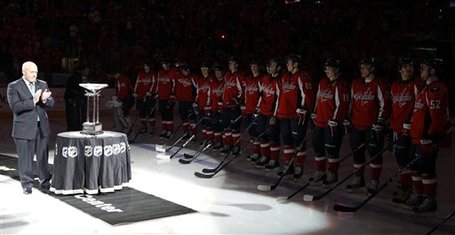 Why do we need the playoffs in an Olympic year?  We've all had enough hockey, right?  Photo via cdn0.sbnation.com

At the end of the regular season, we have a pretty good idea who the best team is anyways (it's the Capitals, right?).  There's already been 82 games played, and with the Olympics thrown in there, there's too much hockey to add the playoffs at the end of it.  So why do they do it?  I think it's based on greed.  They have a television contract, sell a lot of tickets, and don't pay the players for the games, either.  I say, drop it and give us a good reason why we should play it.