People who know me even moderately know that when it comes to the NHL, I'm a massive Montreal Canadiens fan.  I bleed bleu, blanc, et rouge and nothing will ever change that.  It's the pure fanboy in me, I caught the bug watching Patrick Roy, Guy Carbonneau, Chris Chelios and the rest in the late 1980s and ealry 1990s, and every season since 1993 has been pretty disappointing in the end.  This year, however, is a little bit different.

Back when I was a young boy, I also developed a much smaller affinity for the Chicago Blackhawks.  There was no overlying reason for it, perhaps the most obvious reason was watching playoff games broadcast out of the old, ridiculously noisy Chicago Stadium.  They were a good team back then, too, and being in the Campbell Conference, they never had to face the Habs so there was no reason to hate them.  Denis Savard was fun to watch, and when he was traded for Chelios, the Blackhawks made a memorable run for the Stanley Cup in 1992 on the backs of Chelios, young star Jeremy Roenick, and the goaltending of Ed Belfour.  Dominik Hasek made his debut back then as well, and I vividly remember his playoff debut in relief of Belfour, who struggled mightily in his first Finals against the Pittsburgh Penguins.  It also helped that I had a great experience at the 1991 Canada Cup, when during an exhibition game in Saskatoon, Jeremy Roenick took his time to sign autographs for every single young fan he could.  Fans of my generation have generally had a negative opinion of Roenick's personality and on-ice antics (unless they were already fans of the team he played for), but he was always gold in my eyes for that gesture back in Saskatoon.

I'm going to be running a series on the various Champions of the hockey world this past year throughout the summer months, and there's no better place to start than with the ultimate club champions:  the 2009-10 Stanley Cup Champion Chicago Blackhawks.

In building this championship team, and in light of who they played in the Final, perhaps it's fitting to recall the lucky bounce that finally went Chicago's way and directly contributed to the euphoria seen in Chicago today.  At the end of the 2006-07 NHL season, the Chicago Blackhawks finished 28th out of 30 NHL teams, a showing that wasn't uncommon to the team at the time.  They finished 29th in 2003-04, but due to the NHL lottery system had to pick 3rd overall in the 2004 Entry Draft after the Washington Capitals, who had finished 28th, won the first overall selection and the right to select Alexander Ovechkin.  If there were no lottery, Chicago would have been in position to pick Evgeni Malkin second overall, but they had to settle on Cam Barker at third overall.  Needless to say, that's quite the drop off, and terrible luck in general.  Barker has become a good offensive defenseman, particularly on the power play, but he was traded earlier this season to Minnesota for Kim Johnsson, who suffered a concussion late in the season and never played in the Stanley Cup playoffs at all.  In the famous 2005 draft lottery, where every team had a shot at first overall, the Blackhawks got the seventh pick, and selected Jack Skille.  Meanwhile, the Pittsburgh Penguins, by virtue of not winning the lottery the year before, had one of the best chances to obtain the first overall pick, and ended up winning Sidney Crosby. 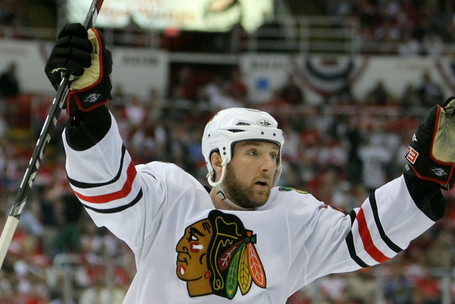 In 2005-06, coming out of the NHL lockout, the Blackhawks were bad again, finishing 28th out of 30 teams.  Again, they did not win the draft lottery, as the last place St. Louis Blues did and promptly selected promising young defenseman Eric Johnson with the top pick.  The Penguins again finished below Chicago, and with their final high pick (they picked in the top five for five straight years, four times in the top two), they picked Jordan Staal.  While the bounce didn't go Chicago's way, they still ended up with arguably the top player in the 2006 Entry Draft, as they were able to pick current team captain Jonathon Toews third overall, and truly begin their team building process.  Toews played a year with the University of North Dakota after his draft year, so the Blackhawks had to wait out another year of bad hockey before making their move to the top of the hockey world.  And it's a good thing they did.

Finishing dead last in 2006-07, 30th out of 30 teams, were the Philadelphia Flyers.  The Flyers seemed to have a decent enough team, but stumbled horribly out of the gate and never got going.  Waiting as the prize for their awful play should have been Patrick Kane.  With a 48.2% chance of picking him due to the weighted system, Flyers fans could keep solace in their team's poor showing with the idea of adding Kane to a solid young core of forwards that included Mike Richards and Jeff Carter.  However, just as the luck hadn't been there all year for Philadelphia, that chance eluded them as Chicago finally got their turn to pick first after being in the mix for the previous three draws.  The Blackhawks added the small, shifty OHL star to their stable of youth and instantly appeared to have joined Pittsburgh and Washington as a team that was bad, but seemed capable of a quick turnaround with the young skill they had assembled.

Had the lottery gone Philadelphia's way, the 2009-10 Stanley Cup Finals probably would have gone the other way.  Patrick Kane's first three seasons with the Blackhawks couldn't have gone much better.  He led the team in scoring in his rookie season (2007-08), winning the Calder Trophy, with his teammate Toews finishing as a runner-up.  The team just missed the playoffs that year, but the young duo had helped spark renewed interest from a long dormant fanbase who had been turned off by the recently deceased owner, William Wirtz.  "Dollar" Bill Wirtz had famously refused to air the team's home games on local cable, believing that it kept fans at home and reduced the value of buying tickets for the games at the United Center.  Wirtz's death left the franchise to his son, Rocky, who immediately embraced "new" ways to market the franchise (even though airing home games on cable television was standard practice during the 1990s).  He also hired John McDonough from the Chicago Cubs marketing department to be the team's president, and helped bring former Blackhawks greats like Stan Makita, Bobby Hull, and Tony Esposito into the organization as ambassadors.  In July 2008, the Blackhawks helped utilize having Stanley Bowman on their staff to bring his father, Scotty Bowman, into the organization in an advisory role.  Stan Bowman replaced Dale Tallon as general manager a year later. 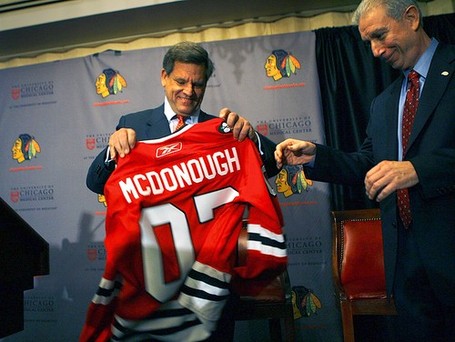 Tallon's role in building the Blackhawks cannot be forgotten.  While he was behind picking the big names at the Entry Draft, he also made some important trades and later draft picks that helped build the current nucleus of the team, adding players like Patrick Sharp, Dave Bolland, Kris Versteeg, Antti Niemi, Nicklas Hjalmarsson, and Troy Brouwer.  With loosened purse strings from Rocky and McDonough, he also added (sometimes very high priced) free agents like Brian Campbell, Cristobal Huet, Brent Sopel, Tomas Kopecky, and Marian Hossa.  The team improved greatly in 2008-09, finishing fourth in the Western Conference and advancing to the Western Conference Finals before falling to the defending champion Detroit Red Wings in five games. That season also marked Toews' first year as captain, even though he was only a sophomore.  It also saw a key coaching change early in the year, as Denis Savard was replaced by the much more experienced Joel Quennville.  Perhaps most importantly, the Blackhawks sold out every game, a trend that continued this season (and for the foreseeable future)

This past year, Chicago finished second in the Western Conference, winning their first division title since 1993.  Patrick Kane again led the team in points with 88, but come the playoffs it would be Toews that would lead the team offensively.  It wasn't an easy ride for the Blackhawks, who survived a first round scare by the Nashville Predators.  The Predators twice led the first round series, taking the first game, and then again the third game to take a 2-1 series lead.  Two Antti Niemi shutouts helped even the series before a pivotal Game 5 in Chicago.  In that game, the Predators held a one goal lead late when Marian Hossa sent Dan Hamhuis into the end boards with a highly controversial hit.  Hossa got five minutes for boarding for the hit, but was not ejected from the game.  The Predators failed to score on the powerplay, and the Blackhawks were able to catch a lucky break as an errant pass sprung Toews and Kane out of the zone, allowing for a rare offensive zone opprotunity.  The Blackhawks pulled Niemi for the extra attacker (making it five skaters each), and the puck eventually found Kane all alone in front of the net to tie the game in the final minute.  The Blackhawks proceeded to kill the remainder of Hossa's major penalty in the early minutes of overtime, and once the penalty expired, Hossa went unchecked to the front of Nashville's net and scored the winner on a rebound.  The Blackhawks were so close to facing elimination, but avoided that fate and never once actually did face an elimination situation.

After defeating the Vancouver Canucks in the second round for the second straight year in six games, the Blackhawks surprisingly swept the top ranked San Jose Sharks in the Western Conference Finals to set up their first Stanley Cup Finals appearance since 1992.  The opponent?  The team they leapfrogged in that 2007 NHL Draft Lottery in order to obtain Patrick Kane.  After the home team won each of the first five games, it was Kane's turn to shine in Game 6.  He scored the winning goal in overtime on a bad angle shot through Flyers goaltender Michael Leighton's legs, a shot hardly anyone saw go into the net at all.  Meanwhile, James van Riemsdyk (the player the Flyers took second overall in 2007) and the Flyers could only watch in disbelief as the Blackhawks celebrated the team's first championship in 49 years on their home ice.  That kind of accomplishment deserves some celebratory music:

Think this series might have gone the other way if not for that bounce in 2007?  Sometimes, the lucky bounce that determines the outcome doesn't even happen during the game: