Hockey may have plenty of international pedigree, but it falls desperately short of football/soccer in its international influence. With the start of the FIFA World Cup in South Africa (check out SB Nation's World Cup coverage), I thought it'd be interesting to look at this pinnacle of international competition and see what hockey could learn from it, or if the current system achieves the best possible results for the sport in general. Can hockey ever achieve even a quarter of what the FIFA World Cup does in terms of international recognition? Can hockey ever truly capture the sporting world's attention for a month at a time? Is there a hockey only event out there that countries (other than Canada) would spend millions on just to host, or at least potentially grow into such an event?

Currently, the Olympics, occurring about two-thirds of the way through every fourth hockey season, are top dog when it comes to international hockey, and it isn't even close. Prior to NHL participation in the Olympics in 1998, however, the National Hockey League (and primarily the Player's Assocation) felt it was necessary to hold their own best on best tournament, called the Canada Cup until 1996, when it was christened the World Cup of Hockey. The Canada Cup/World Cup tournament bore its roots in the most famous international hockey series, the eight game 1972 Summit Series between the USSR and Canada. However, since Olympic participation, and partly due to hostile relations between the NHL and NHLPA, the World Cup tournament has only occurred one time since 1996, in September 2004, when it was overshadowed by the upcoming NHL lockout.

The World Cup of Hockey is supposed to occur again in the fall of 2011, although little has been discussed publicly about it since the NHLPA fired Paul Kelly. Kelly was the NHLPA's Director during the negotiations for the tournament, and the man who announced the tournament's tentative date. We currently don't know anything about the exact dates of the tournament, venues, size of the tournament (and participating nations), sponsors, or even if this tournament is still taking place. My gut instinct fears it's no longer in the cards, as the tournament itself has become an afterthought in the NHL operation. That's why I cringe at suggestions that the NHL should become more involved, or even in charge of major international competition. The IIHF, itself a terribly flawed organization, at least knows how to host an international hockey tournament, something the Bettman era NHL has lost sight of.

But enough about the business of the NHL. Are the Olympics the ideal setting for a best on best competition for the sport? Currently, it's hard to argue for much more. The Olympics are a 12 team tournament, and it's hard to argue for greater participation for international hockey than that. The qualification process for the Olympics involves the top thirty ranked teams, so technically Turkey could have made a great run this past year and qualified, but in the end they only qualify three teams in addition to the top nine ranked teams in the world as of the mid-point rankings (for 2010, it was 2008, for 2014, it'll be 2012). The biggest problem with the Olympics, however, is not the tournament's size, or even the qualification format. The biggest problem is that the tournament's location (and therefore relevance) is ultimately made by the International Olympic Committee. 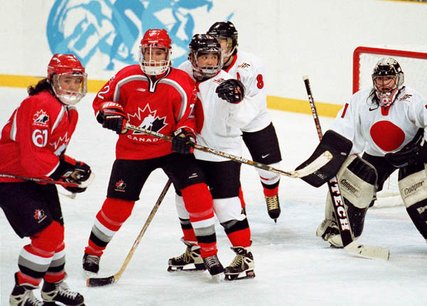 Best on best? In Nagano '98, Team Japan entered teams in both the men's and women's tournaments. Photo via media.olympic.ca

If the NHL and IIHF continue to ride with the IOC for the foreseeable future, who knows where that will lead? At first, it led to the curious location of Nagano, Japan. The interest in the hockey part of the tournament was quite high back then, but that was because it was the first time NHL players were allowed to participate. Having this best on best tournament in a time zone incredibly inconvenient to 99% of the world's hockey fans isn't the best idea, and having it in Nagano also meant that Japan, as the host nation, got to enter their national team in the tournament. Japan has sent several teams to the IIHF World Championships' top division, but that was when the Championships allowed a Far East qualifier. The team was never competitive, and soon that qualifier division was lost, and they have since been ranked pretty consistently at about 20th or 21st in the world.

European hosting is by no means a guarantee of hockey getting a top billing, either. Torino in 2006 saw the games played in smaller rinks than most World Championships are played in, and the tournament came with mixed results in terms of coverage and remembrance. The Italians, a better team to have automatically qualify for the tournament than the Japanese, were still outclassed. The tournament came off as awkward in North America, partly due to the fact that the NHL had only re-opened four months prior from a year long lockout. It's the kind of result that the NHL truly hated: neither the USA or Canada played for a medal, and with the games held in an awkward time zone, the league claimed they got no exposure for the sport or their players out of the tournament at all. Surely, though, Sweden and Finland enjoyed the tournament, as the two neighbours faced off in the gold medal game, with Sweden winning. 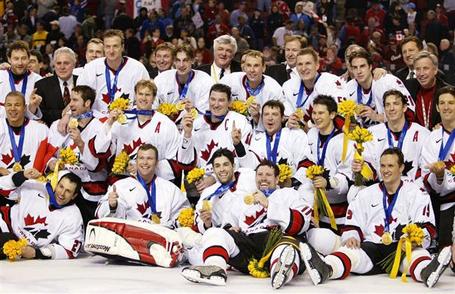 The 2002 Olympics in Salt Lake City were viewed as a huge success for the sport. Photo via www.canada.com

The two times the Games have been held in North America in recent years (2002 in Salt Lake City and 2010 in Vancouver), the results have been great for both the IIHF and NHL. The hockey games were hot tickets, the media coverage was sensational, and the hockey was terrific. It's hoped that with the Winter Games in another hockey country in 2014 (Sochi, Russia), that the tournament will again be a focal point and receive excellent exposure. But the IOC doesn't necessarily have to place the Olympics in a hockey mad nation, and has their own agendas. In 2018, the Olympics will be held in one of the following three bid cities: Annecy (France), Munich (Germany), or Pyeongchang (South Korea). From a hockey perspective, Munich is the best case scenario, and Pyeongchang is probably the worst. Early indications hint that Pyeongchang is the bid to beat, and it makes sense as Europe was the host continent in 2006, while Asia last held the games in 1998. If the South Korean city were to win the bid, they would be the lowest hockey ranked country to host the Games, and even though South Korea appears to be a nation on the rise in hockey, they have a long ways to go to be competitive at the Olympic level (their women's team is in worse shape, currently ranked 28th, behind even the infamous Bulgarian team).

And it could get more interesting in the future. Reports out of New Zealand indicate they are looking at hosting the Winter Olympics in the future, with a possible bid for 2022 in the works. Could you imagine the Canadian men's (or women's) team taking on New Zealand? The plus side of a Southern Hemisphere host would be the fact that hockey season would not have to be put on hiatus for the event. However, it points to the fact that for hockey fans, the Olympics isn't necessarily the ideal venue for the sport's best tournament. There needs to be something else, and that's where the World Cup of Hockey should be able to fill in.

Tomorrow, we'll look at various ways to improve (and, you know, hold) the World Cup of Hockey in the future. In the meantime, come on Denmark, take out the Dutch!