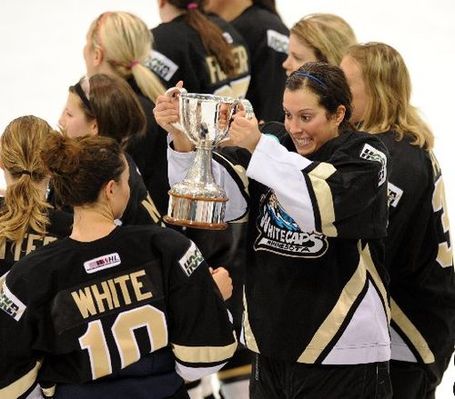 Will the twenty-sixth Governor General of Canada's donation to the world of hockey prove a worthy companion to what the sixth Governor General presented way back in 1893?  And maybe some actual good will actually come out of the disastrous NHL lockout of 2004-05 after all?  (On a side note, no one likes to mention that year at all in hockey circles anymore.  It's impossible for me to forgive and forget for that one, and you'll see it continually brought up in the future here at Puck Worlds.)

Back in those dark days of no professional hockey on TV save for a few American Hockey League games, then Governor General of Canada Adirenne Clarkson proposed that since the Stanley Cup would not be awarded to the top men's club team in the world, that perhaps it should be given to the top women's club team, since they were still competing.  It didn't happen of course, but out of that very public discourse came the idea for Clarkson to follow in Lord Stanley of Preston's tradition and present a trophy specifically to the top women's club team in the world.  There had been trophies that had been awarded in the past to women's clubs, but often they were simply named after the league they were awarded by.  The Clarkson Cup represents a true championship trophy for women's clubs, and could be the start of a new tradition that becomes familiar to hockey fans.

We're in the infancy of the championship, but in 2009 it got off to a familiar start:  a team from Montreal won the very first Clarkson Cup, just like the 1893 AAA Montreal club.  The Montreal Stars, featuring three members of 2010 Gold Medalists Team Canada (Caroline Ouellete, Marie-Philip Poulin and Kim St. Pierre), triumphed over the Minnesota Whitecaps 3-1 that year.  But unlike the Stanley Cup, which was 24 years old by the time an American team (the Seattle Metropolitans) won the trophy, the Clarkson didn't take long at all to make a trip across the border.

Despite the interest surrounding the women's game in the lead-up to the 2010 Olympics, the Minnesota Whitecaps found themselves playing in a fledgling league, the Western Women's Hockey League.  'League' was perhaps too generous of a term...  there were only three teams in operation in 2009-10.  Even the once powerful Calgary Oval X-Treme (who boasted a large number of Canadian Olympians due to Calgary also being the training centre for the national team) didn't play league games.  The season was contested between the Whitecaps, the Edmonton Chimos, and the Strathmore Rockies.  While the narrative one likes to hear about a team which lost the big championship the year prior only to win it the next involves several obstacles facing the team in it's path to redemption, that simply wasn't the case here, at least not in league play.  The Whitecaps went 10-2 for the WWHL season, easily winning their second consecutive championship.  They were a perfect 6-0 against the Chimos, and 4-2 against the Rockies.

Their league play ended February 7th, just in time for the teams to release their players for the Winter Olympics in Vancouver.  The Whitecaps are an almost exclusively American club, and boasted the following Olympians:  D Angela Ruggerio, D Caitlin Cahow, F Julie Chu, and F Jenny Potter.  Ruggerio, Chu, and Potter served as assistant captains to the Americans, who were unable to avenge their defeat in 2002 on home ice in Salt Lake City, taking home the silver medal after a 2-0 loss to Team Canada.  The Olympic hardware didn't stop there for members of the Whitecaps, as one of the non-Americans, D Heidi Pelttari of Finland, took home a bronze medal.  Another Olympian, F Iya Gavrilova of Russia, was amongst the Whitecaps players at the Games, helping Russia finished sixth at the tournament. 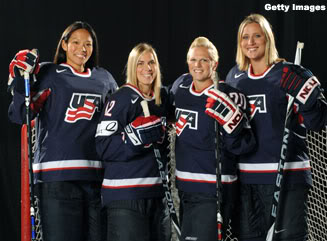 Perhaps not winning at the Olympics helped motivate the women for the Clarkson Cup tournament to which they had earned a repeat visit, though.  The Clarkson Cup tournament featured four teams, with the Whitecaps being the lone WWHL representative.  The Whitecaps were to meet the Mississauga Chiefs in one semifinal, and the defending champion Montreal Stars played against the Brampton Thunder in the other semifinal.  The tournament, held in Richmond Hill, Ont., was much less ballyhooed than the Olympics, but it did receive television coverage in Canada.  The gap from the end of the Olympics to the tournament's start date in late March also hurt the Whitecaps' cause.  Many players didn't bother to participate, whether nursing minor injuries or returning to their homes after the emotional comedown of the Olympics.  When the Whitecaps finally showed up in Richmond Hill, they only had eleven skaters and two goalies.  Olympians like Ruggerio, Cahow, Pelttari and Gavrilova were all unable to play.  Things didn't look too good for the WWHL Champions.

But, for two games, those eleven players were enough.  The Whitecaps defeated the Chiefs 3-1, while Brampton prevented a rematch of the inaugural Clarkson Cup Final by beating the Stars 3-2.  In the Final game, the Whitecaps got the early lead on a goal by Chelsey Brodt-Rosenthal and never looked back.  Jenny Potter, Maggie Fisher, and game MVP Brooke White-Lancette added goals while goalie Megan Van Beusekom-Sweerin stopped all Brampton shots in a 4-0 shutout win.

Unfortunately, the win was overshadowed by the statements by IOC President Jacques Rogge, who said that if women's hockey could not become more competitive that they would consider dropping it from the Olympics.  As Ryan Kennedy of The Hockey News pointed out, it's funny this has never happened to other Winter Olympic events dominated by the same nations over and over again, such as luge (both men and women's).  Women's hockey is still in a precarious state of its growth, and taking away its visibility completely outside of North America would do tremendous damage to the sport as a whole.  Hopefully the Clarkson Cup has more challengers in the future, and perhaps more visibility (several players have approached Gary Bettman and Bill Daly about the feasibility of a women's professional league, or 'WNHL').

For the WWHL, good news is on the way.  From the sounds of things, the Calgary Oval X-Treme will return in 2010-11, and will be joined by the Manitoba Maple Leafs.  Hopefully former teams like the British Columbia Breakers and Saskatchewan Prairie Ice can return, as well as a second American team, but for now a five team circuit looks a lot better than a three team one.