Globetrotting: Hockey News from Around the World

Share All sharing options for: Globetrotting: Hockey News from Around the World 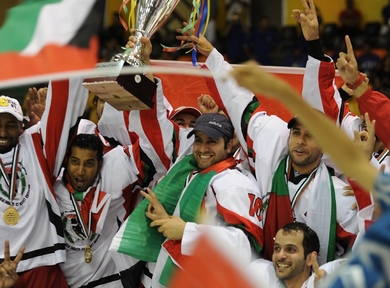 This hockey thing is spreading...  the UAE won the first Gulf Ice Hockey Championship.  Photo via www.iihf.com
Well, I've meant to do one of these earlier, but here's a quick look at some recent hockey developments around the world...
The Hershey Bears won their second consecutive Calder Cup, ending the North American professional hockey season with a 4-2 series win over the expansion Texas Stars.  The Bears are the primary affiliate of the Washington Capitals, who won the Presidents Trophy in the NHL this year.  It was Hershey's 11th Calder Cup Championship in their 72 year history.  They've found a great mix of minor league veterans and good young prospects in Hershey in recent years, and young American blueliner John Carlson played the hero again, scoring the Cup winning goal.  Carlson, more famously, scored the WJHC winning goal in overtime against Canada in January.  [SB Nation Washington DC]
New kid on the block (and that's saying something, since Puck Worlds is only in its second month) Jon S. has launched Hockey International, and he looks at the idea of expanding hockey's international profile through more club play, including bringing North American clubs over to Europe to play in a championship circuit.  [Hockey International]
At this year's IIHF Challenge Cup of Asia, Malaysia unveiled their secret weapon, a Swedish trained forward named Loke Ban Kin.  Loke made a huge difference for Malaysia, helping them advance to a medal game for the first time.  E. at A Theory of Ice looks at why, even at this level, a star player isn't enough to overcome team skill.  [A Theory of Ice]
Speaking of low level international play, did you know that the World Championships weren't the last tournament before summer?  The United Arab Emirates skated away with the first ever Gulf Ice Hockey Championship, a tournament which included the host Kuwait, Saudi Arabia, and Oman.  Next year's tournament, likely to be held in the Emirates, could see Bahrain and Qatar join as well.  The tournament even received TV coverage.  It was the first international games in the history of both Saudi Arabia and Oman (UAE and Kuwait are full members of the IIHF).  [IIHF]
More news from the IIHF, including the unveiling of this year's Continental Cup hosts and format.  This isn't quite the level of international club competition Hockey International proposed, as it features no teams from top European leagues this year at all.  The Super Final will be held in mid-Janary in Minsk, Belarus, featuring last year's champions Yanoust Minsk, as well as Austrian champions Red Bull Salzburg and two qualifiers.  [IIHF]
Regular season updates in Australia and New Zealand...  the Sydney Bears are currently leading the AIHL standings, but it's a tight race with the Melbourne Ice and Newcastle North Stars with games in hand on the Bears.  [AIHL]
Meanwhile, the NZIHL season is just five games old, and very evenly matched to date.  However, the interest in the sport in New Zealand has never been higher.  The IIHF has done an article on their website on the country and league, but here's a TV report from TV3 in New Zealand that probably inspired the IIHF article.  [TV3]
And, oh yeah, if you haven't read Ellen Etchingham's (that'd be E. of A Theory of Ice again) article at The Walrus called Ice Houses of the Holy, well... here it is.  It's not a news story, but it's just great, great writing about her experience barnstorming in southern Ontario a couple years ago.  [The Walrus]
I'll be doing some work here in the coming days relating to the NHL Entry Draft.  Visit SB Nation's 2010 NHL Entry Draft if you aren't making stops there already.  It's got player profiles, a mock draft, and will be featuring some articles as well in the coming days.  [SB Nation]