Where to Find Hockey in June

Share All sharing options for: Where to Find Hockey in June

I've been asked by readers of the blog what I'm going to be covering during the offseason.  It's a fair question, this blog launched on the very first day of the 2010 IIHF World Championships, covered that and the Memorial Cup over the next seventeen days, and then for all intents and purposes of this blog, hockey season ended.  I'm not here to cover the NHL's Stanley Cup Final between the Chicago Blackhawks and the Philadelphia Flyers (though I did a little write up on the nationalities of the players involved), and I haven't billed myself as the go to source for the Calder Cup Finals, either, though they are worth drawing some attention to (Hershey Bears vs. Texas Stars).  Other than that, you'll be hard pressed to find much hockey being played anywhere, and certainly not that of a high level.  It's summer, right?

The Australian Ice Hockey League kicked off their season on April 24, shortly after the national team returned home from participating in the Division 2, Group A World Championships in Mexico City (Apr. 11-17).  Yes, North American hockey fans, you missed out on seeing a hockey game between Australia and Mexico this past April.

The AIHL is a seven team circuit that of teams in four different Australian states (plus the Canberra Knights, in the Australian Capital Territory), and runs from April through August.  The makeup of the league is mainly Australian as well as a sizable amoung of ex-pats from Canada, Europe, and the USA.  The current leading scorer is a Canadian, a Wayne State alumnus named Jason Baclig, who had 13 goals and 20 points in his first six games (there have been games since I wrote this).  The top Australian born player so far this year appears to be Lliam Webster, a forward for the Melbourne Ice who had 13 points in four games. 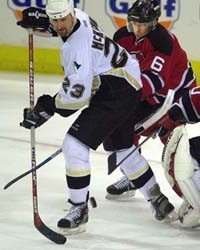 If you're a hockey player who wants to spend some time down under, and you think you can cut it at this level, most teams have open tryouts, and who knows, former NHLer Steve McKenna might be in the crowd.  McKenna played in the AIHL for the Adelaide Avalanche, got married, and became Australia's national team head coach.  Teams in Australia compete for the Goodall Cup, which interestingly enough has been competed for since 1909, making it the third oldest hockey trophy still competed for today (behind the Stanley Cup and Allan Cup).  Yes, there has been hockey, played on ice, in Australia for over a hundred years.

Of course, if Australia is playing hockey, you can bet New Zealand is at as well.  The New Zealand Ice Hockey League is even smaller than the AIHL, with only five teams in total.  The main difference between the two leagues, however, is that the NZIHL doesn't start until this coming weekend.  Yes, this might be the only place in the world where the country's best hockey league starts in June.  There are fourty games total, and then a one game championship series followed by an All-Star game in mid-September.  The All-Star Game pits the best players from the North Island against the best from the South Island.

Like the AIHL, the NZIHL relies mainly on locals for the league, but is complimented by ex-pats from more traditional hockey countries to help out.  Jeff Bonazzo, a Thunder Bay native, is both New Zealand's national head coach and a player for the Southern Stampede (based out of Dunedin).  The best New Zealander?  Brett Speirs, who also plays for the Southern Stampede.

Of course, there are year round hockey leagues in North America and Europe, mostly of the pickup variety.  There are summer development camps for kids through to young professionals as well.  But if you truly need a hockey fix in the summer, your best options are to go south.  WAY south.