Share All sharing options for: CHL Import Draft: Is Major Junior the right path for Europeans?

We've been talking drafts and junior hockey programs so much lately, why stop now?  The Canadian Hockey League, the umbrella organization that oversees the three major junior hockey leagues (WHL, OHL, QMJHL), held their annual CHL Import Draft yesterday.  The Import Draft is a bit of an odd one, as not unlike the KHL draft, the teams have to weigh not only talent and organizational need, but the distinct possibility that the player picked might prefer to stay in the league he's currently in.  There's also the possibility now that the KHL will have drafted a player, and the player will have to decide which league will better suit his needs.

Major Junior teams are allowed to keep two spots on their roster open for import players, that is any player whose nationality is not from Canada or the United States.  Each team is allowed two selections, in order of reverse finish per league.  The draft order always alternates per league:  if the worst finish in the CHL is from a QMJHL team, the next pick will be the worst team in either the OHL or the WHL, depending on their point totals.  The order of selection will continue that way throughout the entire process (eg. QMJHL-OHL-WHL). There are sixty teams total in the CHL, meaning there are 120 available roster spots for import players, though not every team uses their two available import spots.

What's notable about the CHL's Import Draft selections is how unlike they are from the NHL Entry Draft's European selections.  There is no relation between having more import players in the CHL and a draft selection.  In the world of the CHL import draft, the Czechs, Russians, and Slovaks rule.  Sweden and Finland are a fair distance behind, and Switzerland, Germany, Latvia, Belarus and Denmark all show respectably.  Even Belgium, a country I ranked 31st in junior hockey, has had a player (Mitch Morgan) selected in 2008.  It truly is a free for all, and yesterday's selections were no different.

Going first overall to the Prince George Cougars of the WHL was the man who I featured in my 2010 NHL Draft review's picture, Martin Marincin.  Marincin was selected by Edmonton in the 2nd round of the NHL Entry Draft, and will be bringing his big 6'3" frame to bluelines around the WHL for the next two seasons.  It's a big blow to the Slovakian U20 team which competes in the Slovak Extraliga:  Marincin was their first ever player to be drafted since the team was formed back in 2007-08.

Marincin was a steady top choice:  a relatively proven player who probably gave a commitment to a team that can't be too choosy given the market they serve.  Prince George is one of the more remote outposts in the entire CHL, and isn't exactly a top destination for European talent as a result.  The next two selections, however, were home run swings:  Nail Yakupov, a 16 year old Russian winger selected by the OHL's Sarnia Sting; and Martin Frk, a 16 year old Czech winger by the QMJHL's Halifax Mooseheads.  These are two of the top prospects, not for next year's NHL draft, but for the 2012 NHL Entry Draft.  They both have late '93 birthdates, after the Sept. 15 draft cutoff date, and are two of the more well known European 16 year old hockey players.  Frk especially drew attention with a 7 point performance (in 6 games) at this year's U-18 WJHCs, playing against 17 and 18 year olds.  If either of these players commit to coming to North America, they will be huge additions to their clubs, potentially franchise changing impact players.  In Halifax, Frk is already being hailed with comparisons to Cam Neely, and are going to be pulling out all the stops to convince him to come over. 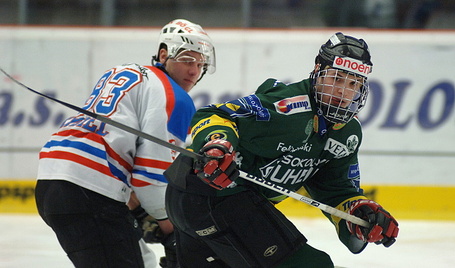 Czech phenom Martin Frk could be headed to the Halifax Mooseheads of the QMJHL.   Photo by Jan Cech, used by permission of HC Energie Karlovy Vary.

There are some upcoming prospects that also were selected, but those were by far the biggest headlines.  Team Russia's U20 goaltender Igor Bobkov was picked up by the OHL's London Knights, but he's only junior eligible for one more year.  Danish forward Nicklas Jensen (a 2011 draft eligible), who scored 13 goals in 5 games at the U18 Div. 1A Championships this past year, was selected by the OHL's Oshawa Generals.  We've also got a couple of real oddities in this year's class:  Hungarian forward Janos Hari was selected out of Farjestad's J18 club in Sweden by the Montreal Juniors, while English forward Robert Farmer was picked by the Ottawa 67's.  Hari went undrafted this past year despite leading the Swedish J18 circuit in scoring, while Farmer racked up 17 points in 36 EIHL games for the Sheffield Steelers and helped lead the Great Britain U20 team to promotion to Div. 1.  It'll be interesting to see these players in the highly charged, professional atmosphere of major junior hockey.

All that being said, the use of the CHL import slots for player development hasn't worked well for the countries involved.  Russia performed much better internationally before 2008, when Russians started to be selected at a very high rate for the CHL Import Draft.  Czechs and Slovaks have been secondary powers in junior hockey for years, and Sweden has risen to be the top European power with 10 or fewer players playing in the CHL.  While each decision has to be made on a case by case basis, there appears to be no real reason for so many kids from Czech Rep., Slovakia, and Russia to join a major junior team.  For every Nino Niederreiter (picked 2nd in last year's CHL Import Draft), there seems to be way more Zdenek Bahenskys (picked 1st overall in 2003).