Yesterday, news broke from Russian newspaper Soviet-Express that New Jersey Devils star winger Ilya Kovalchuk has been offered over $40m USD for three seasons ($14m of which would be paid in the first year) to play for SKA St. Petersburg of the Kontinental Hockey League.  The offer is assumed to be after taxes, as most monetary reports out of Russia are often reported as the after tax result (rather than in North America, where the monetary reports are all pre-tax), which means that by quite a long shot, SKA is planning on making Kovalchuk the highest paid hockey player on the planet.  It's a distinction that Kovalchuk may still obtain if he turns them down and signs with a NHL club, but he will clearly not get a better offer than what SKA has allegedly put on the table.

First off, we must be clear on one thing:  this is not an official report of an offer.  Some translators have offered up the interpretation that this report is speculative, and not necessarily hard facts.  It has certainly been treated in North America as hard news, however, as it has been widely speculated that a major KHL club would offer Kovalchuk more money than he could make in the NHL, which limits individual salaries to 20% of the salary ceiling (which for 2009-10 was $56.8m per team, so $11.36m per season before taxes).  Depending on where Kovalchuk were to sign a NHL contract (and what tax breaks he could exploit), that effectively means he would only receive at best half the money of the KHL offer.  From a purely financial point of view, assuming SKA and the KHL can honour that contract, the short term financial choice for Kovalchuk is pretty obvious.

Comparisons to Bobby Hull and his signing with the WHA's Winnipeg Jets in 1972 seem natural, except for the fact that free agency is a widely accepted part of today's hockey world, which was not the case back in Hull's time.  When Bobby Hull shocked the Chicago Blackhawks at the end of a long contract dispute by signing for $1.75m total to play in the new league, the NHL had been used to total control of player movement.  Hull only had two offers on the table, and that was one more offer than most players would ever receive when their contract was up.  Coming off a 51 goal season and now thirty-three years old, the former Hart Trophy winner and Stanley Cup champion made the choice for his future.  For Ilya Kovalchuk, it's not clear if taking the offer with St. Petersburg truly is the best move for his future.

In eight seasons in the NHL to date, Kovalchuk has earned $35,390,000.00 in salary according to the website HockeyZonePlus.com.  That figure doesn't reflect the total money he would have earned in that time, as his rookie contract bonuses (estimated to be worth an additional $9m or so over his first three seasons) were not included, but even so, his total earnings in three seasons of the KHL would exceed what the NHL has paid him in eight years, and at age 27 currently, the term length of the deal would offer him plenty of time to return to the NHL to finish his career.  However, one has to wonder how the NHL in three seasons will view Kovalchuk:  he will clearly not get as much money (relatively) as he could get today, having to re-acclimatize to North American rink surfaces, systems, and lifestyle.  His reputation, completely unfairly, will be negatively impacted by such a move and his perception amongst fans league wide would be quite low.  Some fans can't accept that a player would choose a different path than to compete for a Stanley Cup, even if it means playing the game in a foreign country for half the wages.

With two fifty goal seasons already, five seasons of over a point per game, a Calder and a Rocket Richard Trophy to his name, he has accomplished quite a bit as a NHL player already.  He has 338 career goals and 642 points in 621 games, and the last time he scored less than forty goals in a NHL season he was a teenager (and scored 38).  In terms of shooting talent, he's regarded as one of only a couple of NHL players who consistently scores at a higher rate than expected based on his shot totals and location, meaning he has exceptional talent.  He has elite skills, but team success has eluded him at the NHL level, even after his mid-season trade from the Atlanta Thrashers to New Jersey.  If team success is what motivates Kovalchuk, he may be out of luck in the NHL and have to take a chance at improving an emerging club, something he likely does not desire.  If not, he'll have to take significantly less money, or sign a Marian Hossa style contract (front loaded, extremely long term to reduce the cap hit).  Of the elite NHL teams, San Jose appears to have the most cap space, but have expiring contracts to Patrick Marleau, Evgeni Nabokov, Joe Pavelski, Devin Setoguchi and Rob Blake to consider as well. 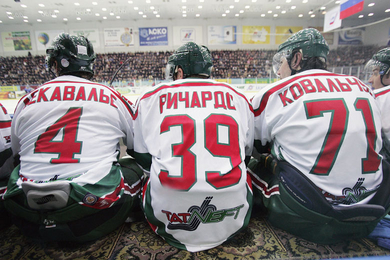 During the 2004-05 NHL lockout, Kovalchuk played for Ak-Bars Kazan.  He also started 2005-06 with Mytishchi Khimik while in a contract dispute with the Altanta Thrashers.  Photo via www.azhockey.com

In SKA St. Petersburg, Kovalchuk would be joining the KHL team that finished second overall in points during the regular season, and one that his future teammate and former NHL star Sergei Zubov claimed could beat any NHL team.  They were knocked out of the Gragarian Cup Playoffs in the first round by Dinamo Riga, losing 3 games to 1 in a best of five series, so playoff success eluded them.  Adding Kovalchuk would solidify their positioning as a top team, not unlike Hossa signing with Chicago last offseason.  If joining a winning team is important to Kovalchuk, SKA offers him a chance to do that as well.  However, SKA are an aging team, as 12 of their top 14 scorers from last year will be 30 or over this coming season, including aging stars like Zubov, Alexei Yashin, Maxim Sushinsky, and Sergei Brylin, not to mention starting goaltender Robert Esche.  Should Kovalchuk join the team, he could see many of his teammates retire before his contract expires, and continued success is not a guarantee as a result.

Perhaps that is why Kovalchuk is waiting on what the NHL will offer before calling SKA back about their offer.  If money was the only concern for him, there would be no reason to wait at all.  It might be better for Kovalchuk to help a young team become a contender, like the St. Louis Blues or Los Angeles Kings, two teams that have been mentioned as possible destinations.  One of the wealthiest contract offers in hockey history awaits in a few weeks, and Kovalchuk will be able to make a choice all of us mere mortals can only dream of.

If he chooses the KHL, it will be the biggest name the upstart league has ever scooped from the NHL, and almost certainly the biggest name they will ever land, though some significant names could still follow.  Rather than being a glorified retirement circuit, or a league where third line European NHL talent make superstar wages, the KHL can legitimately claim to have some of the best players in the world.  Some may view such a move as the start of a possible global hockey circuit, but even if that were to be the case, it'd still be in its infancy.  The fact remains that if he were to leave, one of the ten best players in the world (approximately) would not be playing in the NHL, something that has not been the case for the nearly twenty years since the fall of the Soviet Union.  Is it a mere blip on the radar, or the start of a strange new world?