My hometown needs your help

Share All sharing options for: My hometown needs your help 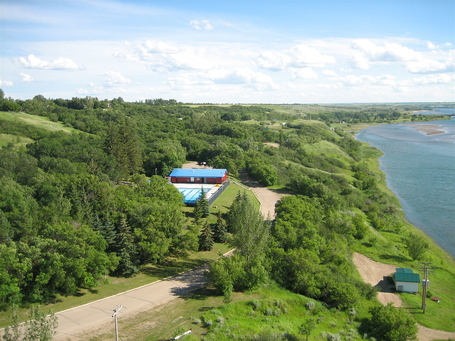 As hockey fans, you're obviously familiar with TSN, Canada's leading cable sports network and generally the top hockey news source out there.  Well, they're running a contest, in conjunction with Kraft, which pits two communities in each Canadian province in need of some upgrades to their sport facilities for a $25,000 prize.  TSN will also do a broadcast of SportsCentre from the winning community.  Kraft makes the kind of food that keeps bloggers like us at SB Nation from becoming liquid creatures after constantly lining up at our local soup kitchens.  That, or easy food to cook when our parents leave the house and we have to leave the basement and face the dreaded sunlight just to eat.

Well, the finalists for my home province of Saskatchewan include the place I spent my teenage years, and the place my parents still live:  the town of Outlook.  The facility in need of upgrading is the local swimming pool, located in the Regional Park in the South Saskatchewan River valley about 80 km upstream from Saskatoon.  As you can see in the photo I took, it's got a unique location and due to that placement, and the pool being nearly 100 years old, it needs some work done to ensure its survival.  River valleys aren't entirely stable, and the pool has been losing water as it is not 100% flat, if you can believe such a thing is possible in Saskatchewan.  Here's the story of the pool on the TSN Kraft Celebration Tour website.

As hockey fans, you may be curious to know some of Outlook's hockey history.  Well, the current four term mayor of the town is former Hartford Whalers (and unfortunately, Toronto Maple Leafs) forward Bob Stephenson, who also has two sons that are currently in professional hockey as well.  One time Memorial Cup winner Shay Stephenson had a cup of coffee with the Los Angeles Kings during their injury-riddled 2005-06 campaign (and currently plays in the ECHL after stops in Italy and Germany), and Logan Stephenson has spent the past 4 seasons in the AHL, most recently for the Philadelphia Flyers farm team in Glen Falls, NY.  Another local, Andrew Sarauer, was drafted by the Vancouver Canucks in 2004 and currently plays for the Reading Royals of the ECHL.

Voting starts at 12 PM EST today, and lasts a full 24 hours, so go here to do so.  So if you feel compelled, vote for Outlook.  If you have read this and now want to vote for Indian Head to spite me, please just don't vote.  :)