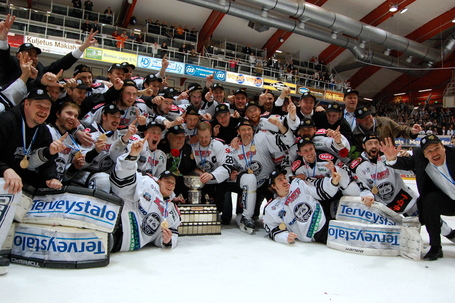 In a 14 team league, winning a championship isn't nearly as difficult as in a 30 team league, or a 60 team circuit like the Canadian Hockey League's Memorial Cup.  The Kanada-malja, translated as Canada Cup and awarded to the playoff champion of the SM-Liiga, is however one of the more celebrated club championships in the world.  It's the top prize in Finnish club hockey, the national prize for arguably the second most hockey mad nation on the planet.  The trophy was donated by Finnish immigrants from Canada, which is where it gets it's unique name, and the trophy has been given out to the winner of the Finland's club championship since 1976, the year that the more famous Canada Cup was first played.  In Finland, the most prolific club since then has been TPS Turku, but the team had experienced eight straight years without a championship.  This isn't exactly unheard of territory...  but with a precarious hold on the most Kanada-malja Championships ever (9 total to Tappara Tampere's 8), there was starting to be a definite feeling of a championship drought in Turku.  For their fans, 2009-10 marked the world righting itself once again.

The glory years of TPS were a 13 year period that bookended the 1990s:  1988-89 through to 2000-2001.  In this time period, TPS introduced the hockey world to young stars such as Saku Koivu, Miikka Kiprusoff, Sami Salo, German Titov, Karlis Skrastins, Antero Niittymaki, Antti Aalto, Mikko Koivu and Fredrik Norenna.  More importantly from a club point of view, they also reeled off an incredible eight championships and three times were runners-up.  The hangover from this run, however, nearly sunk the team.  Financial troubles hit the team, and the prospect pool dried up in a hurry.  There were players drafted from TPS in the mid-2000s, but the best of the bunch was likely Lauri Korpikoski.  A finalist run in 2003-04 under Jukka Koivu's coaching (Saku and Mikko's father) was the exception to the rule, as losing out in the so called "charity round" of the playoffs was the norm (7 vs. 10 and 8 vs. 9 have to 'play-in' to the SM-Liiga 8 team playoff round).  Even the return of Hannu Jortikka as head coach from 2005-07 couldn't elevate the team above mediocrity.  Jortikka had won six championships in two previous stints as head coach, in only seven seasons.

Even in 2009-10, TPS were longshots headed into the playoffs, placing as the 6th seed with a 25-6-2-25 regular season record (W-OTW-OTL-L).  Narrowly avoiding the charity round which had been their fate in recent years, they somehow rattled off an incredible 12-3 record against 3 teams with better records than them in the regular season, including the regular season leaders (and defending Kanada-malja champion) JYP.

Winning a championship isn't always about being the best team from start to finish, and TPS Turku certainly weren't one of those teams.  Things started well for Turku, going 4-1-0-2 to start September, including the most lopsided win of the early season, a 10-2 demolishing of the Lahden Pelicans.  But that fast start gave way to a mediocre stretch during the middle of the season, putting Turku into the middle of the pack.  Big losses in October and November to JYP (6-0, 5-2) showed they weren't ready to compete with the league's top teams just yet.  They needed some help, and with a team low on young prospects (not a single rookie skated for TPS during the playoffs), the help had to come from outside the team, and outside the league.  And that's where American defenseman Lee Sweatt came in.

Sweatt had started the year in the KHL with Dynamo Riga, but was made available to return to Turku after team captain Aki Berg was lost for the season due to injury.  Turku is where Sweatt played his first full professional season two seasons prior (he spent 2008-09 in Austria).  Standing at 5'8", 194 pounds, the Colorado College alumnus' game seemed a perfect match for the SM-Liiga.  In the final 21 regular season games, Sweatt scored nine times and added seven assists.  He even scored the winning goal in a late season game against JYP, a game which helped push TPS into an automatic berth in the quarterfinals.

Since they qualified as the #6 seed, Turku needed to just win 3 best of 7 playoff series to capture the Kanada-majla.  The journey started with a sweep over the #3 seed, Lukko Rauma.  Lukko featured some familiar names to international hockey fans, with Mikael Tellqvist in goal, Antti Laaksonen (who was also the team's captain) and Lauri Tukonen as second line forwards, and promising junior player Eero Elo made the team late in the season as well.  Offensively, they were led by a pair of North Americans:  Justin Morrison and Kurtis McLean, both of whom had career seasons for Lukko.  They proved little match for the suddenly confident Turku team, who despite sweeping the series, continued to alternate their goaltenders (Finnish national Atte Engren and American David Leggio).  The offensive stars of the 4 game series were Czech forward Michal Birner, former NHLer Tomas Plihal, Sweatt, and Ilari Filppula, the older brother of Detroit's Valtteri Filppula.

Next up was a semifinal matchup against the top ranked JYP team.  After an opening game 4-2 loss, TPS were able to take an early lead and hold it for the majority of the game, with an unexpected goal from fourth liner Marko Virtala.  JYP controlled the play after falling behind, and eventually tied the game up in the 3rd period.  But after that, again TPS took control and with less than 12 minutes to play, Sweatt scored the winner to get a much needed road win and even the series.  However, the series did not turn as a result of Game 2:  JYP quickly rebounded with a strong 4-0 win at home to again take the lead in the series.  The real turning point came in Game 4.  Down 2-1 heading into the 3rd, TPS managed to tie the game at 2 with under 6 minutes to play on a goal by Ville Vahalati.  JYP quickly retook the lead 30 seconds later, however, and again it was Lee Sweatt who scored with under 3 minutes to play to force overtime.  In overtime another fourth liner, Antti Erkinjutti, scored the winner for Turku and they never looked back.  A tightly checked 2-1 Game 5 win on the road set up the chance to clinch the series at home in Game 6, and Turku did so decisively with a 6-1 win.

The final series was a bit less dramatic.  Facing HPK Hamenlinna, who finished just ahead of TPS in 5th place, the newfound swagger for TPS burst out to a 3-0 series lead, including two road victories.  Game 3 went to OT, with Filpulla providing the heroics.  Unable to clinch at home in Game 4, Turku had to settle for winning as the visiting team in Game 5, with a strong 6-2 win.  And guess who scored the Kanada-malja winning goal?  Why, the undersized defender Lee Sweatt, who racked up a lot of minutes on the top defense pair with Markus Nordland, who at 6'5" is 9 inches taller than Sweatt.  Despite Sweatt's heroics, it was Filpulla who walked away with the Jari Kurri Trophy as the playoffs MVP.  Filpulla was TPS' top forward, leading the team with 14 points.  Sweatt led the playoffs in goals with 7, and had 13 points and tying with Nordland with a +10 to lead the playoffs.

As for repeating, it seems like a far fetched proposition.  Filpulla is going to try his luck in North America, as he was signed by his brother's team, the Detroit Red Wings, to a one year, two-way contract.  Sweatt is also coming to North America, as he was signed by the Vancouver Canucks and is expected to be a top defender for the AHL's Manitoba Moose.  Fortunately, Michal Birner and Tomas Plihal signed contract extensions with TPS, as did Markus Nordland, who will be re-united with Berg on the team's top pairing.  Goaltender Atte Engren, who despite splitting the starts in the playoffs had a strong season with a .920 SV% in 35 regular season games (plus .935% in 8 playoff games), has signed with the Nashville Predators and is in the mix for that team's backup goaltending job.  David Leggio is rumored to be staying on, but Joni Ortio, Finland's U20 starter last year, should be brought up to take Engren's spot.

Turku's unexpected championship may not be repeatable, but it's one of those championships that helps maintain the mystique of a traditional power.  It'll be interesting to watch the three players who are going to NHL training camps, two of whom may not have gotten the chance without this championship run (Filpulla and Sweatt).  But the run re-energized the fan base, which is one of the largest in the SM-Liiga, as they attracted over 10,000 fans for a few of the playoff games.  If nothing else, hopefully this championship brings the fans back to Turkuhalli with regularity next season.