First up in our European overview is the Czech Extraliga, the top professional league in the Czech Republic.  Founded admist the amicable breakup of Czechoslovakia in 1993, the league is full of teams that are as old as, or older, the Original 6 teams in the NHL.  Probably the most distinctive aspect about the league, for better or worse, is the usage of corporate sponsorship in not just arenas, but team names, and the league name itself.  This isn't completely uncommon in the world of sports (Barclays Premier League), and even in North American hockey (some Canadian Junior A leagues have corporate sponsors for their division names).  But the Czech Extraliga has been the top league in the world that has allowed their name to be sold for advertisement.  Most recently, it was known as the O2 Extraliga, but that sponsorship ended at the conclusion of the 2009-10 season, so for now, it's simply known as the Czech Extraliga.  There's also no updated league logo as a result, as one assumes they will be working on obtaining a sponsor before the puck drops, so below is the one from the last season. 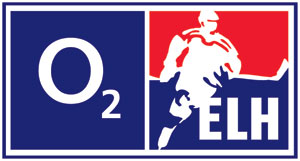 In 1993, the Czechoslovak First Hockey League dissolved with the nation's split, and a new Czech only top level league was formed.  The league format mirrors that of European association football leagues, in that every team plays each other four times in a 52 game regular season format, and the teams have to earn their place in the top league by virtue of a promotion/relegation system for qualification.  These are clubs, not franchises, based in cities and for that reason, we don't see teams lose their hockey teams very often, and all of the teams have existed for the better part of a century, if they haven't reached that milestone already (the two Prague based teams, Slava and Sparta, are over 100 years old).  Differences in the scoring system in recent years make it hard for statistical comparison, as during a stretch from 2006-2009 they only awarded a single assist per goal, so assists totals were kept purposely low during that stretch.  The points system mirrors IIHF rules:  3 points for a regulation win, 2 points for an OT/shootout win, 1 point for an OT/shootout loss, and 0 points for a regulation loss.  Last year's top regular season team, HC Plezn 1929, finished with 106 points in 52 games.

To see where these teams play, here's a view of the Czech Extraliga on Google Maps.

From first glance you may have noticed that there are a lot of championships missing from the current group.  The history of the Czechoslovak First Ice Hockey Division mirrors that of the nation.  The first Czech club hockey team to absolutely dominate were called LTC Prague, and they won the national title every year but one from 1930-1949.  However, when the country turned communist in 1948, the team was quickly banned and its players were arrested as a symbol of western capitalism.  There is no real parallel to an event like that in North American hockey history, and we should be very thankful for that.  After that revolution, other teams finally started to win the title, which was now a purely amateur competition.  Budejovice was the first team outside of Prague to win a championship in 1951, and it remains the only national championship for the club.  Viktovice followed in 1952, before Spartak Prague won their first two of eight championships in 1953 and 1954.  However, Prague's dominance as a city would end there.  An army club in Brno was formed and went on a dominant run as a result, winning 11 championships in a 12 year span.  Brno was no longer an army club by the end of the run, but perhaps not coincidentally their run ended two years before the USSR took over Czechoslovakia in 1968.

As a result of all of these events, a lot of the teams currently in the Extraliga have very little championship history, despite the long history of the national championship.  Most shocking is Slava Prahia only winning two titles despite being around for all 80 years of top level club competition.  Despite this, they are the flagship team in the Extraliga, playing out of the massive O2 Arena which now hosts the opening of the NHL season.  They had the top player in the country in 2009-10 in Roman Cervenka, who blitzed the league for 73 points, winning the scoring race by 18 points.  Cervenka has since signed on with Avangard Omsk of the KHL.

Familiar place names to NHL fans would be Pardubice and Kladno, as their famous hockey clubs helped produce many of the stars that have come to the NHL since 1991.  Pardubice was the team that Dominik Hasek starred for during the 1980s, and his return in 2010 helped lead the club to their 5th title.  Kladno was a dominant force during the 1970s, but became famous amongst North American fans for the players that they produced during the 1990s.  If communism had continued, Kladno likely would have dominated the Extraliga for a 15-20 year period.  They produced Jaromir Jagr, Patrik Elias, Tomas Vokoun, Milan Hlinka, Frantisek and Tomas Kaberle, Tomas Plekanec, Marek Zidlicky, Michael Frolik and Jakub Voracek.  Instead, Kladno finished 14th during the regular season last year, and narrowly avoided relegation.

The playoffs in the Extraliga have 10 teams make the cut of the 14, although it gets pared down to 8 by having seeds 7 through 10 play a best of 5 series to determine the final 2 spots, and then best of 7 series from then on.  The teams that miss the playoffs have to play 12 more games against each other to determine the worst team in the league.  The team in last then plays the top team in the First League in a best of 7 series for the final spot in the Extraliga for the next season.  So there's no early golfing season, or tanking for a good draft position in the Extraliga.

There isn't a lot of foreign content in the modern Extraliga, but a pretty liberal free agency system allows for foreign players to gain spots.  The wages aren't that great, and the KHL has taken a significant bite out of the Extraliga's talent pool as a result.  With over 50 NHL players, 25 or so KHL players, and a high number of junior players choosing to go to North America, the Extraliga has weakened in recent years.  Becoming a capitalist state has again tilted the favour of the league itself towards the urban areas, particularly Prague.  Is this just a small dip in the league's long history, or a sign that a new league, possibly the KHL itself, will be able to better present top level hockey to Czech fans in the future?  It may look like the latter now, but old habits die hard in European club hockey.  The national associations have propped up these leagues for years, and could easily maintain the status quo.  But there is no denying that the state of Czech hockey, and it's national league, is at a lowpoint and it can't continue to decline much further.