Share All sharing options for: EHFD: National League A

A couple of weeks ago, Puck Worlds started a series of introductory posts for the various European professional hockey leagues.  The response has been great so far, but in case you missed them, here's my introduction post (European Hockey for Dummies), and my follow-ups on the Czech Extraliga, the Deutsche Eishockey Liga, the Elitserien, and the Kontinental Hockey League.  The following piece deals with a more recent addition to top flight European hockey, but yet a league with a long history, Switzerland's National League A.  Helping me in writing this article was Urs Berger of http://hockeyfans.ch/, who I met while covering the U20 World Junior Championship this past year for Puck Daddy.  I honestly don't think any crew worked harder covering the tournament than they did...  they know their hockey.

In recent years, Switzerland has been making a notable impact on the international hockey scene, and their top professional circuit's growth matches that of their national team.  National competition for club hockey has existed in Switzerland since 1916, but the league underwent a bit of a makeover in 1999 as the professional nature of the league became realized.  The modern league consists of 12 teams in the top division, with a modified relegation/promotion system between the NLA and the NLB.  Everything is determined by playoffs, as the top 8 teams in the regular season qualify for the playoffs to determine the national champion, while the bottom 4 teams play a tournament to decide who will play the top team from the NLB in a best of seven series to determine who earns a spot in the NLA the next season.

The league suffers from great financial disparity between the top clubs and the smaller teams.  SC Bern draws the top crowds in all of Europe, drawing an average of 16,172 during the 2008-09 regular season.  As you can see from that link, at the bottom end there are teams like Ambrì-Piotta and HC Lugano which struggle to attract 4000 people each game.  While hockey is gaining popularity in Switzerland, the fact remains that it is a small country of under 8 million people, and supporting twelve top clubs is an immense challenge.  According to Urs Berger, the SCL Tigers and Ambrì-Piotta really struggle, resorting to public calls to donate to the club every two or three years just to stay afloat.  However, there is hope in the example of SC Bern.  In 1997, after winning the national championship, the team was broke.  This forced GM Marc Lüthi to forge stronger partnerships with team sponsors, and today the club is amongst the most profitable on the continent.  Of course, for teams in smaller cities, that level of success is likely out of reach, no matter how well the team is managed.  Ambrì-Piotta is really just a couple of mountain villages that somehow have a good hockey team that competes against teams based in Zürich, Bern, and Geneva.  It'd be like if Jasper had a NHL team (and Jasper is bigger than Ambrì).

Join me after the jump for a look at the teams.

For a map of teams in the NLA, click here.

The most famous team in the NLA is definitely HC Davos, located in the famous Alps resort city and the hosts of the annual invitational tournament the Spengler Cup.  Davos makes most of their money from that tournament, and the allure of the competition has helped them to a huge lead in the overall national championships as well.  Davos is also famous for having played in an outdoor rink until 1979, when they finally succumbed to pressure and built an indoor arena in the corner of their immense outdoor public rink.  The whole league takes a break during the Spengler Cup, which starts just after Christmas each year.  Davos earns a reported 2m Swiss Francs for the national broadcast rights for the tournament, while according to Berger, each other team only sees about 80k CH Francs for their broadcast deals.  The Spengler Cup is broadcast throughout Europe and in Canada, and is the most high profile hockey event within Switzerland.

While Gèneve-Servette HC is the oldest club in the current NLA, they have yet to win a national championship.  That long drought nearly ended this past year, as they pushed SC Bern to a 7th game in the final before taking their place as the lovable losers of Swiss hockey.  Geneva's long history with the game reflects their French background, as European hockey at the turn of the 20th century was largely a French and English phenomenon, before catching on further east.  The ZSC Lions, a more recent hockey power in Switzerland, defeated the Chicago Blackhawks last September to become the first European winners of the Victoria Cup.  That achievement is particularly notable in light of the Blackhawks' Stanley Cup championship this past June, although to be fair the Blackhawks did field an exhibition game roster. 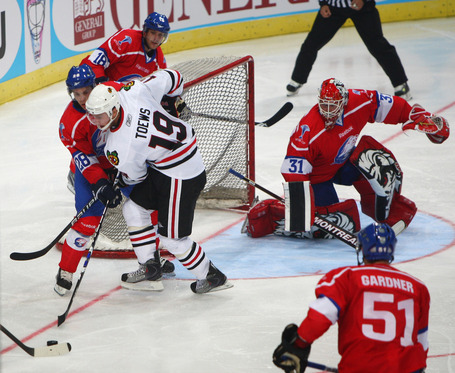 The ZSC Lions play the Chicago Blackhawks in the 2009 Victoria Cup.  Photo courtesy of Getty Images.

No team has been relegated to the NLB since EHC Basel at the end of the 2007-08 season, when EHC Biel gained promotion by beating Basel in a playoff series.  The most famous club in the NLB is HC La Chaux-de-Fonds, a team that won six national titles in a row from 1968-1973.  The NLB also boasts the Swiss U20 program, but that team is subject to losing their best players to club teams and has largely been ineffective as a result.  The GCK Lions in the NLB serve as an informal farm club for the ZSC Lions of the NLA, the only real semblance of a minor league system in the top league.  Like most countries, NLA teams often field U20 clubs for their junior players.

To end this piece, here is a list of top players from the past 20 years or so in the NLA, provided by Urs Berger of http://hockeyfans.ch/: