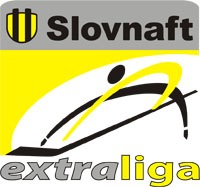 A couple of weeks ago, Puck Worlds started a series of introductory posts for the various European professional hockey leagues.  The response has been great so far, but in case you missed them, here's my introduction post (European Hockey for Dummies), and my follow-ups on the Czech Extraliga, the Deutsche Eishockey Liga, the Elitserien, the Kontinental Hockey League, and Switzerland's National League A.  This next piece is about the Slovnaft Extraliga in Slovakia, probably the least famous of all the leagues.

It's tough being the little guy.  Slovakia has had to fight for the spotlight in the international hockey world since gaining independence in 1993 from their much more famous and powerful (hockey-wise, at least) neighbour, the Czech Republic.  The IIHF decided that the Czechs were the logical successors to Czechoslovakia, and Bohemia before that, and granted the new country the old country's historical record and international standing.  What did Slovakia get?  The opportunity to work their way up, starting from the very bottom, as a brand new IIHF member.  In the 1994 World Championships, the Slovakian national team had to compete in Pool C of the World Championships, which they easily won.  The next year, they won pool B in another pointless exercise, and returned to the top pool of World Championship play by 1996.  It was also in this time that Slovakian club teams broke away from the old Czechoslovak Extraliga and competed against each other for their own national championship for the first time.

The history of Slovak teams in the Czechoslovak Extraliga isn't great.  Hockey in early Czechoslovakia was dominated by teams based out of Prague, and then when Communism took hold in 1948, the balance of power for hockey shifted, but not into Slovakia.  Still, two clubs from modern Slovakia managed to win the national championship, with the two clubs being from what will be the host cities of the 2011 World Championships:  Bratislava and Košice, the two largest cities in the country.  HC Slovan Bratislava became the first Slovak team to win the title in 1979, while Košice won it twice (1986 & 1988) before Slovakia gained its independence.

Early top Slovak players often suited up for Czech clubs.  The first Slovak to play on the Czechoslovak national team was Ladislav Troják, who played for HC Košice before joining the powerhouse LTC Praha team that won every national championship but one from 1931-49 before being abolished after communism took over.  Troják was one of five Czechoslovak national team members who died in a plane crash after the 1947 World Championships.  Today, the arena in Košice is named after him.

Join me after the jump for more on the teams in the modern league.

Click here for a map of the Slovnaft Extraliga's teams.

It should be noted that the two teams in strikethrough will actually not be participating in the Extraliga this next year, which has been reduced from 13 teams to 11.  There will be no teams replacing them.  Also, the team from Poprad (who flirted with getting a KHL team this summer) has yet to submit their licence for this coming season, and has been given an extension to next week to do so.

Due to the lack of history of national championships, no club is experiencing a massive drought, per sé.  There are teams that are quite old that have yet to win one, but the chances of doing so only recently opened up.  In the coming season, the league title will be challenged by only 10 teams, as the Slovakia U20 team will not be competitive in this level.  The Slovakian Ice Hockey Federation decided to have a team of U20 players play against their top men's teams in 2007, hoping the exposure to higher competition would help improve their results.  Other than a 4th place finish in 2009, this has not been the case.  The top U20 players generally don't play for this team, and go to North America instead.  Martin Marincin was a 2nd round draft pick by the Edmonton Oilers this past year, and played for the U20 team last season, but was selected 1st overall in the CHL Entry Draft by the Prince George Cougars, and will play there this next year instead.  The U20 team won only 5 games last year, one in overtime, and lost 31 games in regulation for 17 points total.

It's a league of very few foreign players.  According to Elite Prospects, only 26 players on Extraliga rosters were foreigners, and 23 of those were Czech.  Top non-NHL Slovakian players have recently been going to the KHL, with 26 players currently on KHL rosters, the 4th highest of any nation (even more than Latvian or Belarussian players, who have a team in the league).  Zigmund Palffy, one of the top Slovak players of all time, was one of the most productive players in the league last year, despite being a part-time coach for HK 36 Skalicia as well as captain.  He had 53 points in 36 games, and 12 points in 6 playoff games while also contributing to Slovakia's 4th place Olympic finish in Vancouver.

Most of the top players are older, and younger players quickly move on.  The latest example was Tomas Bulik, a 24 year old who finished 3rd in league scoring with 55 points in 44 games for HC 05 Banská Bystrica, has since signed on in the KHL.  The leading goal scorer last year, 23 year old Marek Bartanaus (a 2005 draft pick of the Lightning), has transfered to HC Sparta Praha of the Czech Extraliga.  The rest of the top 10 scorers in the league are in their 30s.

It's not a sustainable system in Slovakia right now.  That's likely why we've seen an openness to look to the KHL for additional revenue, with Propad trying to land a team and Slovakia's federation not immediately rejecting the possibility like other European nations.  It's a league with a short schedule (4 games against each men's team, plus 3 against the U20s), and it is a league which has gotten even smaller.  The playoffs did draw the top 8 teams last year, and I am unsure if any changes have been made for the smaller league this year.  With so many small cities involved (Bratislava and Košice are the only two above 100,000 residents), and a national population under six million, there isn't a lot of growth potential.  They already have a league sponsor, and they survive on being a nation that takes pride in the sport.  Hockey is the most popular sport in Slovakia as far as fans are concerned (football has more participation as it is cheaper), so the league maintains its viability based on that.  Without moving up in the professional sports ladder, or more foreign content, the Extraliga's quality could begin to wane on the public in the long run.