On May 1st 2012 Denmark faced Italy in a prelimenary warm-up game. It was a match made all the more important by the fact that both teams would later face each other at the group stage of the World Championships. It was the strongest line-up ever assembled by a Danish team. The game was played in Rødovre, Denmark in front of 3500 enthusiastic fans and I was happy to be among them

Frans Nielsen and Philip Larsen were the best players for the Danes with Nielsen dominating the game along with his Nichlas hardt and Lars Eller on the first line and Larsen showcasing a large amount of his technical skill. The Italians were unable to match the pace and skill of the Danes initially and fell behind 2-0 in the first 5 minutes of the game. Unfortunately, the early lead lead the Danes to slow down their play significantly.This resulted in a number of defensive lapses and mistakes, which netted a goal for the Italians. The goal was scored by Giulio Scandella on a rush. Scandella proved to be a consistent threat throughout the game through the use of his speed. Five minutes later Denmark was up 3-1 and the Nielsen line heavily controlled the play for the rest of the period.

The second period had greater parity between the teams with Denmark markedly slowing down their play once again, which let the Italians back into the game with another goal on a lucky bounce. Denmark struggled to recover their play but managed to do so by the time the third period rolled around. They extended their lead to 4-2 and closed out the game easily. Once again the most formidable weapon in the arsenal of the Danes proved to be their power play, which was at a remarkable 100% and 3 for 3 on the night. Frans Nielsen was named the Danish and MVP and Giulio Scandella was named the MVP for Italy. All in all, it was a great night of hockey. Unfortunately, it was also tinged with a hint of sadness as veteran blueliner 44-year old Jesper Duus, who played 15 World Championships in red and white, finalised his retirement and was given a standing ovation and commendations by the Danish Ice Hockey Federation. Furthermore, Danish forward Mads Christensen was forced to cancel his appearance at the World Championships as he suffered a massive head trauma Sunday night. The cause is still unknown, though it is believed to have been a heavy migraine spell.

On a happier note, however, the Danish women's national hockey team also made a stop during the first intermission to receive flowers and an ovation as an appreciation for winning gold in their international division and qualifying for the next tier of the tournament.

I managed to snap a few photos throughout the evening and have posted them below. I hope you enjoy. 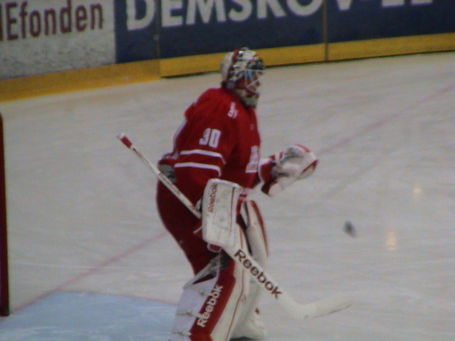 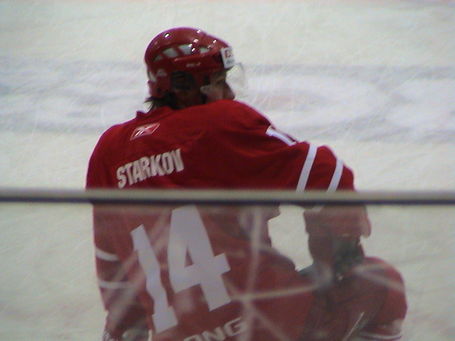 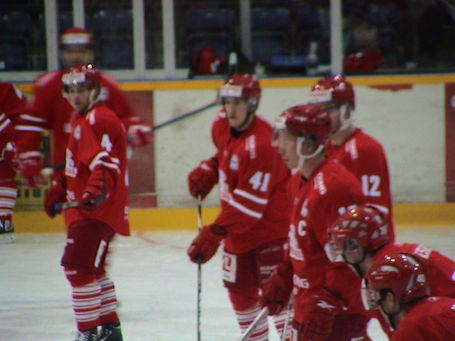 Danish Captain Morten Green, second on the right, helps to direct the practice at the warm-up. 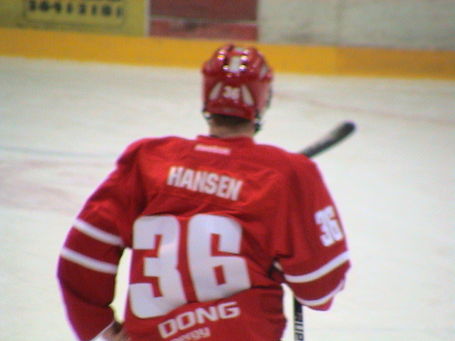 Danish forward and Vancouver Canuck Jannik Hansen at the warm-up 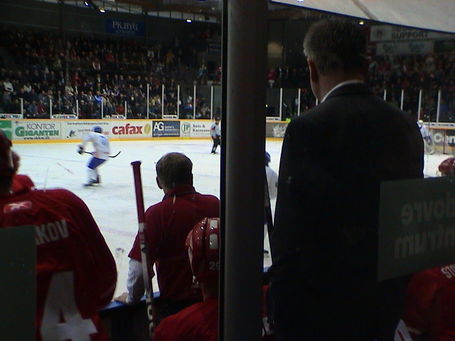 The Swedish coach for the Danish national hockey team Per Bäckman surveys his team and the game. 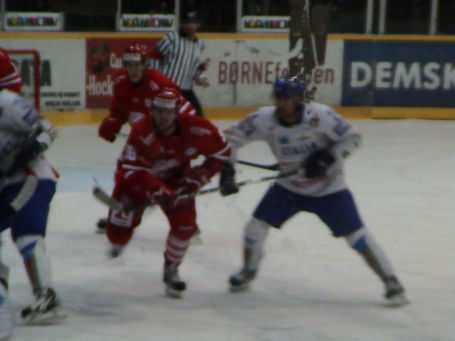 The Danes showed great hustle throughout most of the first period. 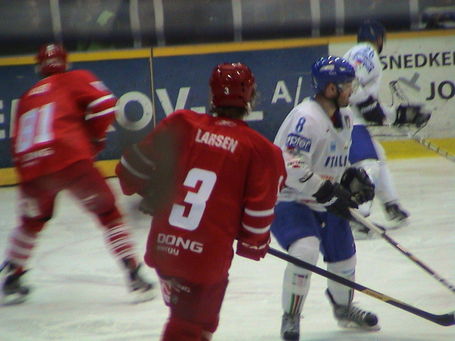 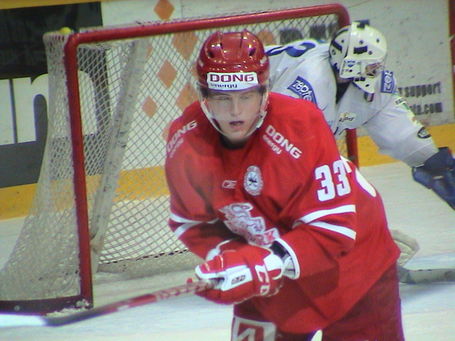 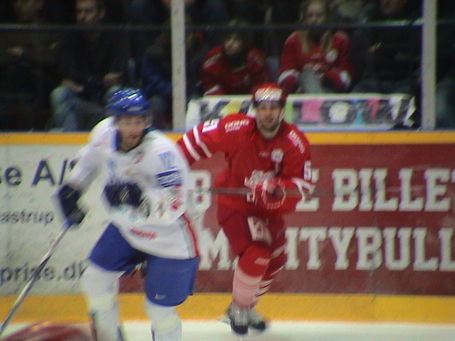 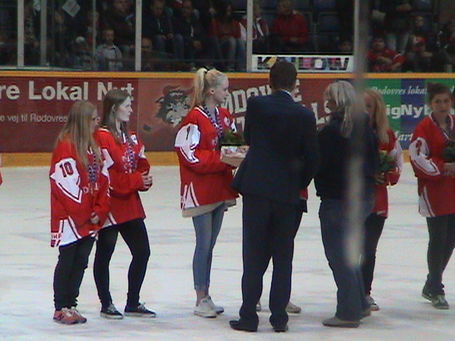 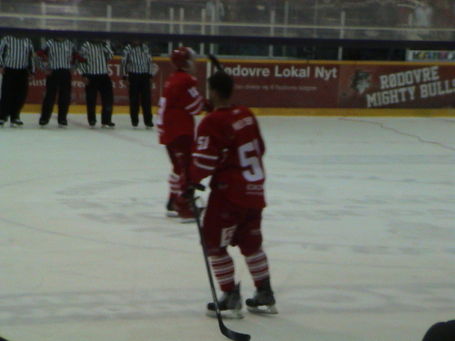 Danish forward and New York Islander Frans Nielsen skates across the ice after being presented with his MVP award. 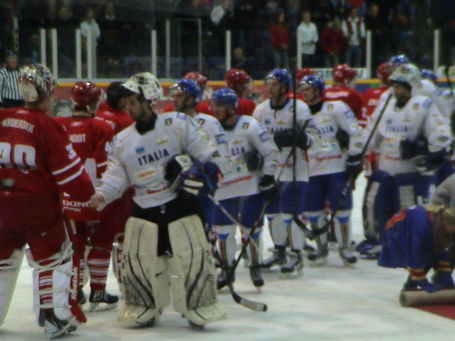 The two teams shake hands after the game. 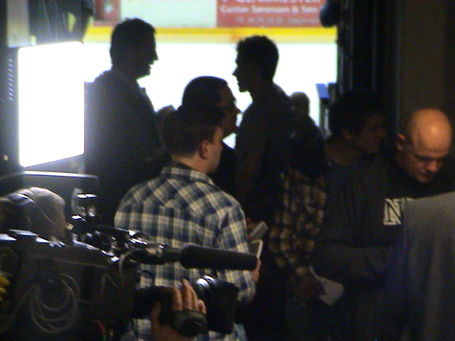 Backstage at the arena where player interviews are conducted. Near the locker rooms. 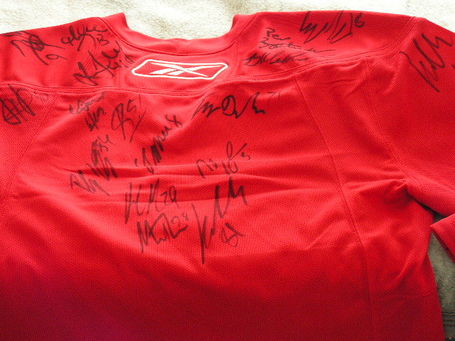 The net result of waiting for over an hour outside the players' locker room. A national team jersey signed by the players including the coach. It is now among my most prized possesions. Thank you so much guys!